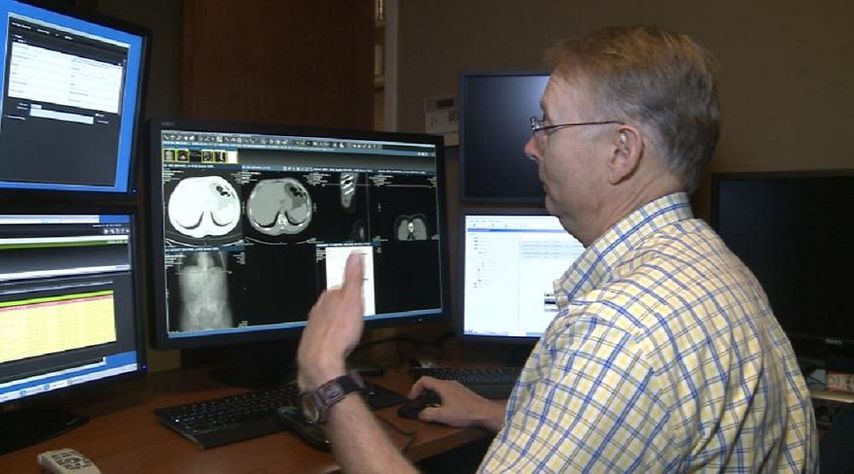 COLUMBIA - A radiology clinic in Columbia said it has a machine that can reduce radiation from computed tomography (CT) scans up to 50 percent.

"When you bring your child in, you'd like it to be as safe as possible," said Dr. Alan Hillard of the Advanced Radiology Clinic.

The machine is called a 128-slice CT scanner. It can take 128 pictures of a patient's body in milliseconds. The machine makes a spiral around the patient as it takes the images.

It allows doctors to calibrate a person's size and customize the amount of radiation needed. A child will need less radiation than an adult.

"As the machine makes this helical spiral, it goes faster than normal scanners and measures how thick the patient is. It then automatically computes the dose of radiation," Hillard said. "The patient only gets the dose they need for their thickness."

When Shannon Bradshaw's son Corey needed a CT scan of his neck she took him to the clinic to use the 128-slice machine. It was an option she did not have when her son, Caleb, needed an emergency appendectomy.

She said she would have preferred to use the 128-slice machine in Caleb's case, but it all comes down to weighing pros and cons of the situation.

"If I chose not to do the CT exam when he had appendicitis, it would have been more harmful I think. Decreasing radiation would have been great and that's something that's very important, but he needed the scan on his abdomen immediately," Bradshaw said.

"A bone is more firm and would absorb more radiation than muscle or air," Alderton said.

Alderton also said that the cost of using 128-slice machine is not much different than using another CT scanner.
According to Advanced Radiology's website, most procedures take between 5 and 10 minutes.

The company said its machine is the only 128-slice scanner in central Missouri. The others are in St. Louis and Kansas City.

According to the Journal of the American Medical Association (JAMA), there are roughly 4 million CT scans taken each year. JAMA reported that, of those, 4870 will lead to cancer.

CORRECTION: According to Jeff Hoelscher, University of Missouri Health Care media relations coordinator, MU's Women's and Children's Hospital also uses a 128-slice CT scanner. Hoelscher said the hospital has had the CT scanner since spring of 2012.