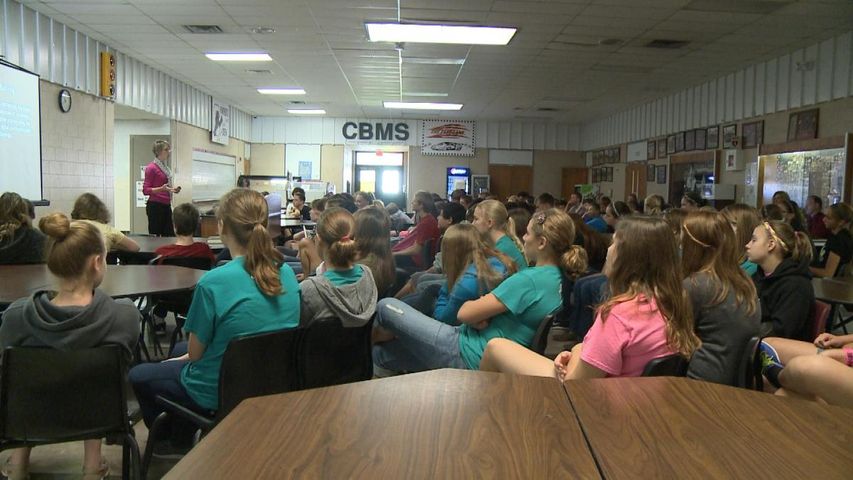 CENTRALIA - A detective with the Boone County Cyber Crimes Task Force talked to 6th, 7th and 8th graders at Chester Boren Middle School about cyber crimes Thursday. One of the main focuses was cyberbullying.

Middle school counselor Mona Dupre explained cyberbullying is much different than the bullying students might see confined to the school hallways. Dupre said, not only is this type of bullying conducted outside of school using social media or text messages, but it is perceived differently.

"When students have the idea that the person on the other end is removed from them and they are not exposed to what that person is thinking or feeling, they are more susceptible to say things that they wouldn't normally say face to face," Dupre said.

Dupre said most cyberbullying happens outside of the school, but in many cases it can overflow into the school. Dupre said for example, "People will send messages, social media hate messages sometimes that say let's all exclude this certain person and so the next day that overflows into school where you have no kids sitting with this one student at school."

That is when the school would become involved, because the issue is student safety. When those types of frustrating sentiments are shared via the Internet or text message, they can be very damaging, and even turn out deadly, Dupre said.

Detective Tracy Perkins said cyberbullying happens everywhere and it is out of control. In a survey conducted with 1,100 6th through 12th grade students in several mid-Missouri schools, 32 percent of girls said they have been the victim of cyberbullying, and 17 percent of boys. At Chester Boren Middle School there's a handful of cases each year.

Dupre said students who feel as if they have been a victim of cyberbullying should report that to school officials or guardian before it can get any worse.