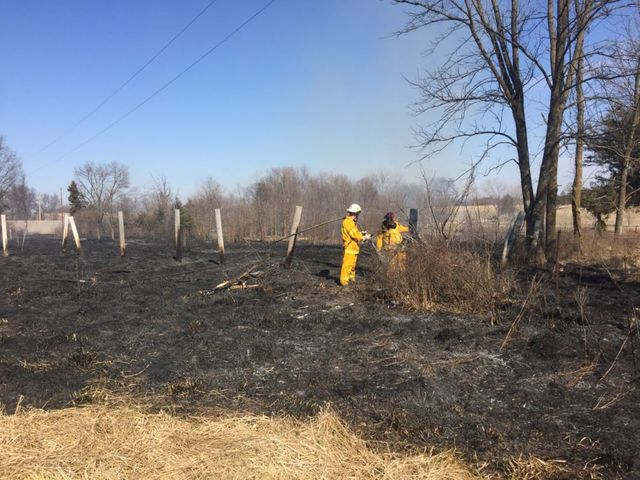 COLUMBIA — Boone County experienced at least a dozen fires Feb. 18, a number that did not surprise fire officials.

That is because Missouri is currently in what officials refer to as “wildland fire season” or “natural cover fire season.”

“The conditions that we’re seeing is the ten-hour fuels, which are your grasses and twigs, are very dry. And then we have relatively low humidities on some days and then erratic winds,” Blomenkamp said.

This dangerous mixture of conditions can quickly turn a small, controlled fire into a scary situation. James Barnard learned that lesson the hard way.

Barnard, a Columbia resident, was looking to burn off some weeds that had collected near his barn when suddenly the flames went out of control.

“The wind picked it up and just took it and it went off into the grass,” Barnard said.

While he had been closely monitoring the flame and had water nearby, he was still unable to stop the fire from spreading through part of his yard.

“I tried to put it out. My neighbor helped me, but it was too hot and too fast,” Barnard said.

The fire had spread almost 100 yards across his lawn in just 20 minutes. The flames did not move toward his house; instead they passed in front of it and were halted by a gravel road.

Firefighters were quickly on the scene and had the fire completely under control within an hour.

Barnard's story is not unusual for this time of year. Controlled burns are common in the Midwest as people clear their fields or get rid of unwanted plants.

Blomenkamp said no matter how closely a fire is monitored, conditions can spread the flame faster than people can fight it.

“The best thing that the public can do is monitoring the weather conditions. If you have winds of 5-10 miles per hour, we would ask you not to burn,” Blomenkamp said.

For firefighters, combating flames spurred by such conditions is part of the job. Most people, however, probably do not have the tools needed to prevent severe property damage or worse.

Some families learn this lesson at a far higher cost than Barnard, but he’ll never forget just how dangerous this season can be.

“It’s a lot more hazardous than I ever dreamed. It just went so fast,” he said.

Barnard has some advice for people thinking about ignoring the warning signs.

“Just don’t do it. Wait for better conditions,” he suggested.

Blomenkamp said the most important thing for people to do is call their local fire department so firefighters can do their job. He said having a water source nearby is also a good idea.

The wildland fire season could last until late March. Anyone with questions about having a controlled burn should contact their local fire station.