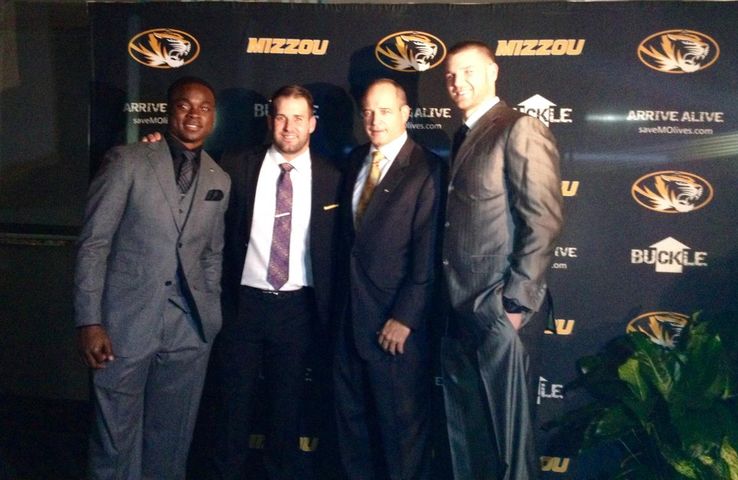 COLUMBIA - Three key members from the highest ranked Missouri Tigers football team are now in the program's Hall of Fame. Chase Daniel, Jeremy Maclin and Chase Coffman soaked in the moment as their college careers were recognized.

All three said they had many great memories from their time playing for MU, but they all agreed on their favorite one.

"Everyone remembers the KU game at Arrowhead with my man with the grass in his helmet," Maclin said.

"Without a doubt, the "Armageddon Game" at Arrowhead, and you know, winner gets number one in the nation and goes on to play Oklahoma in the Big 12 Championship," Daniel said.

He said that game was a big moment for the program and that it was a big factor in taking it to where it is today.

Coffman said that while he did not play a big role in the game against Kansas, it was still an incredible game and still thinks about it.

Maclin said he sometimes thinks about what would have happened had he stayed longer at MU.

"When the season first initially ended, I was thinking about staying," he said. "The more conversations I had with my family, and I think the kicker with me was Coach Pinkel. When Pinkel sat me down and looked me in my eyes and said, 'if I was his son, he'd tell me to leave.' That's all I needed to hear."

Maclin said he thinks the Missouri teams that included Daniel, Coffman and himself contributed to the success the school is enjoying now.

"I'd like to think that myself, Chase and Chase kind of had something to do with it. You know, we kind of set the standard, set the bar and I think we've intrigued people to come here and now it's gone to the next level and now they're competing and dominating SEC play," he said.

"To see where we left the program and where the next class took it and where it's at today, I mean, it's on an upward spiral. No doubt about it," Daniel said. "And that's what we wanted to leave here, when we came here, was a legacy that 'hey, these guys can come in, build it even more, build it even more and the job Coach Pinkel has done building that beast, building that bully."

The Tigers recently signed one of the top recruiting classes in the nation according to ESPN, so the "bully" will continue to grow.