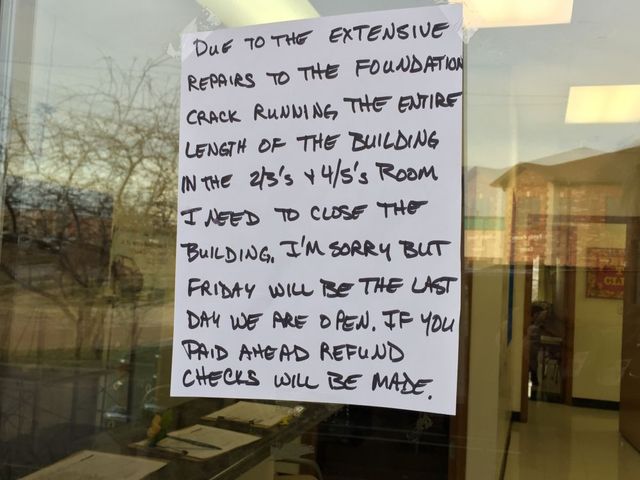 COLUMBIA – Up to 99 children will have to find a new day care facility after a Columbia day care announced Wednesday it would be closing at the end of the day on Friday.

A parent at the Child Learning and Development Center on Corporate Place off Vandiver Drive said the owner told both employees and parents Wednesday the facility would close when the last child left on Friday.

The parent said owner Patricia Seitz gave no warning about the closing. Seitz had been talking to employees about doing Secret Santa the following week.

Setiz responded to KOMU 8 News in an email Thursday saying "This isn't news. I'm just doing some foundation repair to the building which will make it inhabitable for young children."

A sign on the front door of the daycare said the facility was closing because the foundation needed work.

The Missouri Department of Health and Senior Services said the day care has a capacity of 99 children. The parent said a lot of families have taken their children out of the facility recently.

She said this might be because the previous director left, the owner was trying to take over and not everyone agreed with what was happening.

The parent also said there was a lot of uneasiness and miscommunication after the previous director, Debra Purvis, left in early October.

A mother who was at the facility Wednesday afternoon rushed off saying she was in a hurry to get an interview with another day care that had only two openings.

KOMU 8 News reached out to Seitz but had not received a response Wednesday afternoon.

The parent who talked to KOMU 8 News said there are about 12 employees at the day care.

The facility has been cited numerous times for violations dating back to 1994.

The Missouri Department of Health and Senior Services' most recent inspection is from October. In that inspection, the day care was cited for eight violations including the director was not routinely on duty as required and there was no approved director on staff. The facility also did not meet the requirements for child enrollment and health information.

[Editor's note: this story has been updated with a statement from the daycare owner.]