Deaf Dog Thrives at MSD Through Puppies For Parole Program 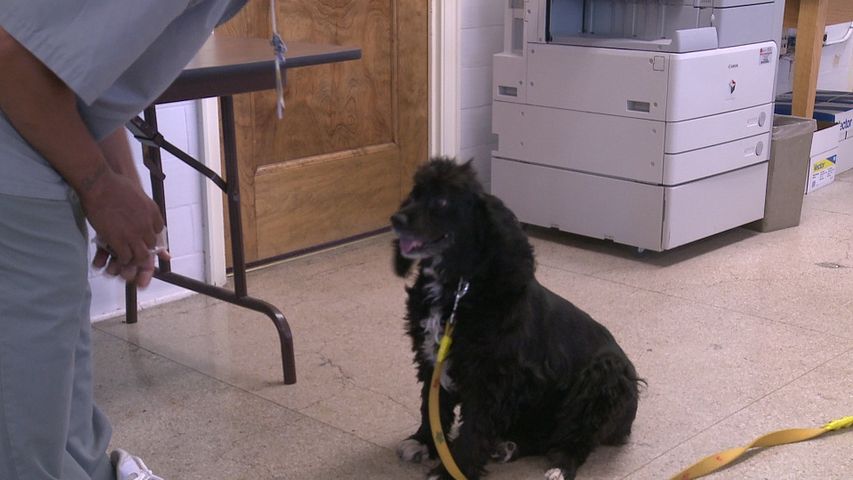 That is until he found a new home at the Missouri School for the Deaf in Fulton.

Visit the school during the semester and you'll find Sparky bouncing down the halls, poking his head into each classroom, and making sure the more than 100 students who live and learn there are kept in line.

Although his squatty stature makes it easy for him to get lost in the crowd, Sparky has no trouble getting noticed.

"He does not fear anyone and as a matter of fact, he is pretty assertive in seeking out attention. Some may call him spoiled. He has a very loud bark," the Missouri School for the Deaf Superintendent Barbara Garrison said.

The latter has students at MSD mesmerized.

"They'll say, 'Well..Sparky can talk!' And I say well...Sparky makes noise just like you can make noise," she said.

Something as small as a bark or whine has Garrison's students realizing...

Before he made his debut at MSD two years ago, Sparky was trained through the Puppies for Parole program at the Southeast Correctional Facility in Licking.

The program gives selected offenders the opportunity to train rescue dogs, in hopes of making them more adoptable.

"Offenders who have shown good behavior and have no convictions of animal cruelty are chosen for the program," Missouri Department of Corrections Public Information Officer Mandi Steele said.

The program doesn't use any general revenue, and is funded entirely by donations - 1,112 dogs to date have enrolled in the program, and 853 have successfully been adopted. The program is active in 18 different correctional facilities across the state.

At the Algoa Correctional Facility in Jefferson City, offender Christopher Tate said training his dog Puddin has made a lasting impact on his life.

"The main thing is that it helped me change my mindset," Tate said. "I'm kind of stubborn and like doing things my own way. Working with the dogs has taught me responsibility and how to go about things in a different way".

When Sparky's training time was up at the Southeast Correctional Facility, staff at the Licking jail raised the money to pay off Sparky's adoption fee. Not long after, Garrison received a call asking if MSD would want a new addition to their family.

"We were thrilled and said yes, by all means bring him. When the students came back from Christmas break, they were introduced to Sparky and instantly fell in love", Garrison said.

Although it's the inmate's duty to instruct each dog, it's easy to see that both learn so much from one another.

And in a place full of educators, Sparky fits in perfectly. But what he teaches isn't something you can find in a textbook.

Garrison says there is one example of "Sparky's Magic" that she and her staff will never forget.

"We had a student that had been a victim of abuse and did not trust anyone, but wouldn't talk about it, not with anybody", she said. "During that student's first visit with Sparky, we just kind of left the room and let him do his magic and when we peeked in the room again, the student had Sparky in their lap and was signing their story of what had happened."

"That student trusted Sparky...and didn't trust anybody else. It amazed us all."

It's summertime, which means lockers are empty, textbooks are shut, and Sparky's only company is Garrison's four other Daschunds - Max, Ladybug, Ginger, and Angel. But when August comes around, Sparky will be back patrolling the hallways once again.