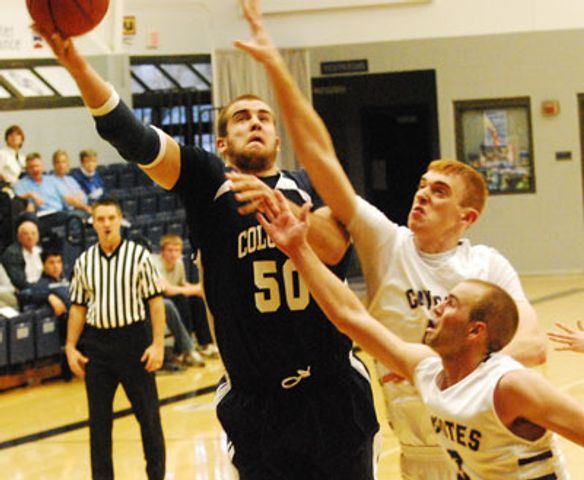 COLUMBIA - The Columbia College Cougars defended their seed on Saturday in the semifinal round of the American Midwest Conference postseason tournament.

Top seeded Columbia defeated fourth seeded Park University Saturday 78-64 to advance to Tuesday's championship contest. Columbia, ranked No. 16 in the NAIA top 25 poll, improves to 25-6 on the season. The loss ends Park's season with a 12-16 record.

Columbia defensive pressure held the Pirates to just seven field goals in the first half while the Cougars connected on 15 of their 27 attempts. Columbia converted 10 Pirate turnovers into nine points and led 41-28 at the break. The Cougars and Pirates shot an identical 14 of 27 from the field in the second frame.

Four Cougars finished in double figures, led by junior Hal Payne who dropped in a game-high 18 points. Taylor Evans chipped in 15 points while Henrique Medeiros had 11 points. Junior Marquette Murrell had a double-double with 11 points and 10 rebounds. Juston Hairston led the Pirates with 15 points and eight rebounds.

Prior to the start of Saturday night's contest, the AMC recognized its academic all-conference honorees in men's basketball. To qualify as a member of the AMC Academic All-Conference Team, a student-athlete must carry a cumulative grade-point average of 3.0 on a 4.0 scale and must have been a member of the program for at least a year. Columbia College honorees include Ben Bowman, Jordan Dressler, Taylor Evans, Hal Payne, Zach Rockers, Tanner Sutton, Blake Walker, Brock Walker and Matt Woodcock.