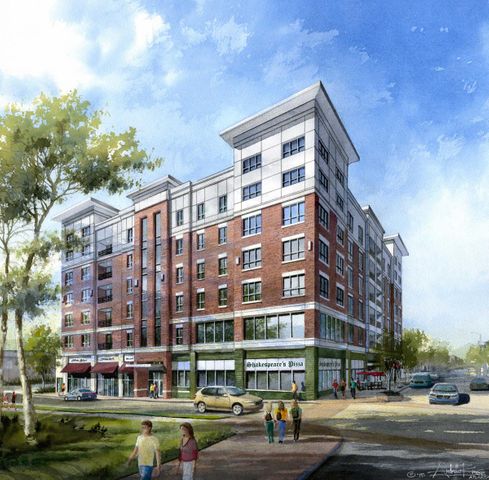 COLUMBIA - The company that will construct a new high-rise mixed-use building in downtown Columbia released the design for the building Tuesday, including what will be the exterior of the new downtown Shakespeare's.

The historic Shakespeare's location at 9th Street and Elm Street closed in May and was demolished in June. The pizza outlet moved to a temporary location down the block while McAlester Park, LLC constructs the new building. McAlester Park was contracted to construct a building that will house retail space, offices, and 50 student and young professional apartments.

The company said the design of the building was heavily influenced by the Downtown Columbia Community Improvement District (CID) guidelines. Some of the guidelines, according to McAlester Park, included promoting a lively and active neighborhood both day and night, blending a campus atmosphere with a downtown atmosphere and providing a pedestrian-friendly environment.

A central element of the new building is Shakespeare's Pizza, which has been located at the corner of 9th and Elm since 1973, and would remain at that location.

"For 42 years Shakespeare's Pizza has not only fed Mizzou students and alumni, but also helped capture the essence of downtown Columbia," said McAlester Park spokesperson Jack Cardetti. "Keeping this iconic Columbia institution at the corner of 9th and Elm Streets for generations to come is good for our town and a critical anchor of this truly mixed-use development."

McAlester Park said the new Shakespeare's building will be 30 percent larger, but retain a layout similar to the original, as well as its original atmosphere.

The company said construction on the development would begin within days, with completion expected August of 2016.