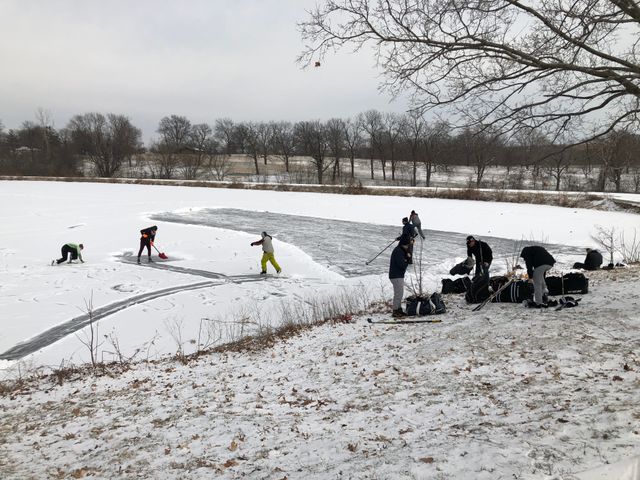 COLUMBIA – Columbia Parks and Recreation says it will take all precautions that people stay safe on the ice at Stephens Lake Park, which opened Wednesday to ice skating.

“Tomorrow afternoon, approximately 5 p.m., we will remove our signs for ice skating at Stephens Lake Park, and you will not be allowed to skate there any time after tomorrow at 5 p.m.,” said Parks Services Manager Gabe Huffington.

Stephens Lake Park is the only public body of water in the area that is deemed safe enough to skate on.

“What we actually do, is we will drill out starting from the shoreline, working our way to the center. And what we have to have from shoreline to close to the center will be about a 4-inch depth thickness of ice,” Huffington said.

Several people made sure to catch some time on the ice while it is still there, including Jason Kleweno.

“I couldn’t resist doing a little bit of ice biking. I get to come out here and enjoy the weather. It’s a once in a year type of deal,” he said.

Graham Geyer said he was taking advantage of a natural resource.

“Hopefully we’ll get some colder weather and a refreeze and we can be out here ice skating again, cause it’s amazing that you get to do it on a natural lake,” he said.

Cosmo-Bethel Lake did not meet requirements and could not be opened for recreational use.

The Department of Fire Safety made a Facebook post Wednesday, saying “no ice is '100% safe ice'" to skate on when it comes to natural bodies of water.

The department's website said a number of factors are in play, including fluctuating tempatures and exposure to sunlight.

Huffington said, because temperatures are expected to rise Friday, skaters and anyone who goes on the ice should remain cautious and follow specific rules for being on natural ice.

“Always skate with someone else. We don’t encourage anyone to skate by themselves. Make sure you’ve got other people with you. Try not to congregate in one area. We want to make sure we kind of spread our use evenly throughout the lake,” he said.

Park rangers will be patrolling Stephens Lake Park over the weekend to make sure people are not on the ice when it could potentially be melting.