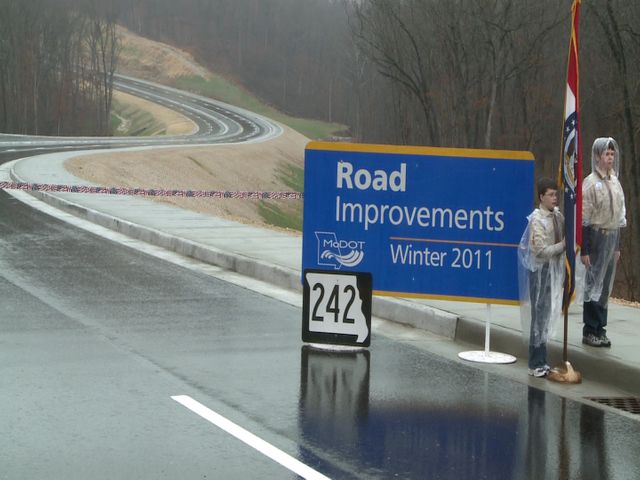 CAMDEN AND MILLER COUNTIES- Two major highway construction projects are completed at the Lake of the Ozarks. A ribbon-cutting ceremony was held on Tuesday morning to celebrate the completion. The final stage of the new U.S. 54 Expressway and the new Missouri Route 242 are the two completed projects.

The final phase of the U.S. 54 Expressway extends for four miles, from the Grand Glaize Bridge to just west of Route KK in Camden County. The work cost $31.6 million. The new expressway opened to traffic in late November, but work on the tie-in connections continues through the end of 2011. This first phase began in October of 2007.

Route 242 is a four-lane highway, which connects U.S. 54 in Miller county to the Lake of the Ozarks Community Bridge on Route MM in Camden County. The roadway is two miles long and cost $3.8 million. The route had its groundbreaking in January 2011. The project is expected to encourage business, tourism, and help boost the economy.

After the ribbon was cut and the flags were retired, there was a parade of vehicles on the new Route 242. Official vehicles led the parade, followed by every car and driver who attended the ceremony. These were the first vehicles to drive on the new route. The route opened to the public after the ceremony.

There was also a photo opportunity near the Harley Davidson Dealership on Osage Beach Parkway to show off the new U.S. 54 Expressway. A ribbon-cutting took place there as well.