Difficult Task for Drivers to Steer Clear of Deer in November 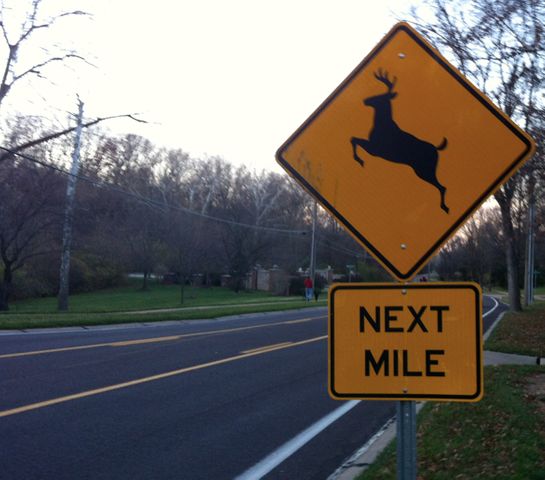 COLUMBIA - Odds are a record number of people will hit a deer this November.

According to car insurance companies in Columbia, November accounts for 18 percent of all deer-car collisions and the chance of hitting one is going up.

"In Missouri, the chances of you hitting a deer with a car or vehicle within the next twelve months is one and 116," State Farm spokesperson Jim Camoriano said.

The rate makes Missouri a high-risk state for deer-car collisions because it is now in the top third for risk among states. Last year, Missouri was a medium-risk state with every one in 135 drivers hitting a deer, the 18th highest total in the nation.

While hunting season and a growing population contribute to the spike in November collisions, the main culprit is romance.

"A buck's home range...is going to enlarge during the breeding season," Missouri Department of Conversation deer biologist Emily Flinn said. "(A buck) wants the area that he lives in include more does so that he has a greater chance of encountering those does to breed them."

During breeding season, bucks travel greater distances to find mates, which increases their chances of crossing a road or highway and being struck by a vehicle. According to Camoriano, people are three times more likely to hit a deer in November than almost any other month.

"They're acting crazy," MoDOT Senior Maintenance Worker Brad Peffermann said. "They're crossing the roads trying to find each other. They're more willing to come out into the open than they would be at a different time of the year."

Peffermann added that number of deer he cleans up goes up five-fold this time of year.

The price tag for hitting a deer isn't cheap. The average property damage per claim is $3,300 according to State Farm Agent Stephanie Wilmsmeyer. The key to avoiding costly claims is to drive slower around dawn and dusk, use high beams when necessary and stay in your lane instead of swerving if a collision is possible.

Although cleaning up deer isn't Peffermann's favorite thing to do, he's glad more collisions don't happen in the summer.

"This is the best time to do it because they're frozen," Pefferman laughed. "They're not all hot and nasty."

If there are deer that need to be cleaned up, call MoDOT at 1-888 ASK MODOT or send a message online.