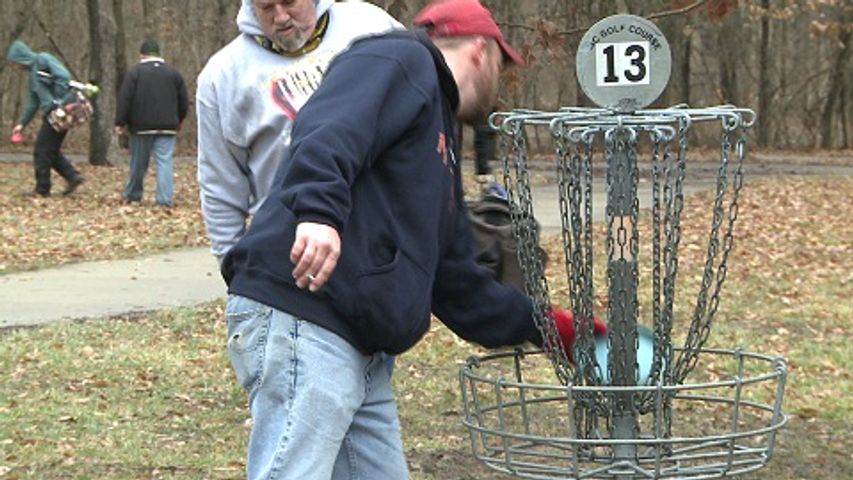 COLUMBIA - The rain wasn't enough to keep golfers away from the 27th annual Ice Bowl tournament.

However, golfers said the rainy weather was actually better than the conditions they typically play in. The tournament is held every January the weekend before the Super Bowl, hence the name "Ice Bowl."

Frisbee players from all over the state joined the competition and helped the Columbia Disc Golf Club raise money for the Food Bank for Central and Northeast Missouri and Almeta Crayton's "Everyone Eats" program. The collected non-perishable food and the $15 entry fee went toward the charities.

Players attempted to get the lowest score on the disc golf course at Albert Oakland Park on Sunday. The best possible score was 54, but to get this golfers had to work not only against the weather, but the terrain as well.

The sport requires that golfers play the Frisbee from wherever it lands, even if that means in a creek, a wooded area, or for some, in mud pits along the path.

Paul Morrison, one of the golfers, said he has been golfing for 16 years and even trained his son in the sport. His son won a title in the PDGA Amateur Disc Golf World Championships last year.

Although Morrison considers himself an amateur, he said the Ice Bowl is one of his favorite tournaments because of the laid back environment.

The Ice Bowl originated in Columbia in 1987 and is now one of the nation's top disc golf tournaments during the winter. Each tournament donates money to nearby food banks.

But this isn't the only tournament, cities all over the nation have tournaments throughout the year. One of the summer's largest tournaments, Mid-America Open, is also held in Columbia.

For this tournament, however, the group hopes to raise $1,000 and 200 pounds of food for the local charities.