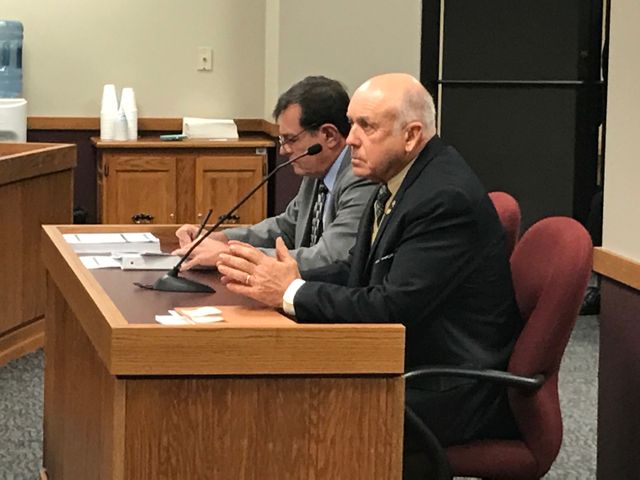 JEFFERSON CITY - Rep. Warren Love, R-Osceola, did not receive any disciplinary action from the House Ethics Committee hearing on Thursday. The behavior in question was about the controversial comments Love made on Facebook about hanging vandals for throwing paint on a confederate monument "from a tall tree with a long rope."

The ethics committee voted 6-4 to reprimand Love with recommendation he be removed from his committee duties. Hearing procedures give the respondent an opportunity to accept or deny the actions of the committee. Love denied the reprimanding.

"I called out a crime. I was the only legislator in the state to do so," Love said.

"You do not believe you deserve any punishment for what you've done wrong, is that what I'm hearing here today?" said Rep. Michael Butler, D- St. Louis.

"That would be correct," Love said.

A report will be filed with House Speaker Todd Richardson within 45 days. He will then decide if any disciplinary action should be taken.

The possible outcomes for the preliminary hearing included dismissing the case, moving to an investigative hearing or making a motion for action. If the committee voted to motion for action, it could have issued a reproval, reprimand or censure. All of those actions would be sent to the House Speaker to be issued.

The meeting was a preliminary hearing, meaning comments would be limited to the complainants - Rep. Gail McCann Beatty, D- Kansas City and Rep. Alan Green, D- St. Louis - and the respondents - Love and his lawyer Melvin Gilbert.

Beatty and Green had concerns specifically about the language Love used.

"When you hang someone without authority, that's lynching. If for lunch you have a ground beef patty with melted cheese on the top served on a bun, you're eating a cheeseburger regardless of whether you choose to call it that," Beatty said. "Representative Love called for a lynching, simple as that. Four months later he still does not understand why this is a problem."

The hearing was originally scheduled for Dec. 22, 2017, the Friday before Christmas. House Democrats said the timing would hide the hearing from public attention. Beatty asked for it to be rescheduled after the legislative session opened in January.