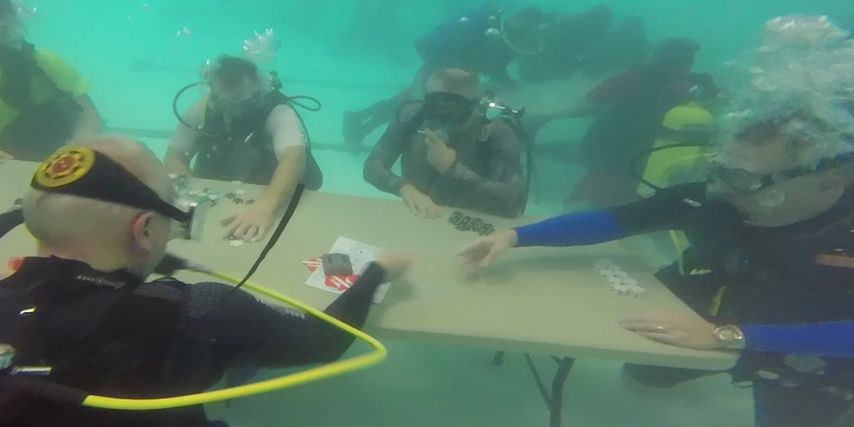 JEFFERSON CITY – Scuba divers put on their scuba gear to play poker under some wet circumstances.

More than a dozen people got their hands wet Sunday night at the Jefferson City Area YMCA on Stadium Boulevard.

Scuba Adventure hosted its first annual Underwater Poker Tournament to help raise money for “Dive with a Cop,” a group that helps children with disabilities learn how to scuba dive at no cost.

“A lot of these kids have really not had much fun in their lives, and it’s a very rewarding thing for those of us who are able to help and do something for them so they can have some fun,” he said.

Adams said people without diving experience could play in the tournament.

“Anybody can do it, you don’t even have to be an actual scuba diver,” Adams said. “We can take people that had never been in the water before and work with them for a few minutes and get them comfortable, and they can participate.”

Although the game is under water, the rules are all the same.

“But everything’s slowed down because of the resistance in the water,” Adams said. “The cards do sink and the chips stay down, so we have to be careful because any little movement, it can make your cards float away.”

For Kevin Bland, a paramedic with the Mid-MO Ambulance District and Miller County Ambulance, has been diving for around eight years now and said the diving wasn’t the hard part.

“The little challenge is understanding the game,” Bland said. “It’s kind of hard to bluff when nobody’s talking and everybody’s got the same face with the mask.”

“Dive with a Cop” will be held on Sunday, March 4 at the Jefferson City Area YMCA.