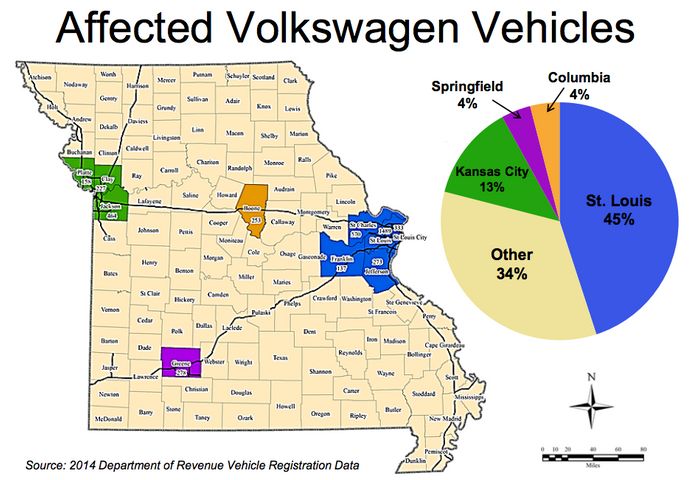 COLUMBIA - Missouri’s Air Pollution Control Program and the Department of Natural Resources are in the process of deciding which emissions projects the state should fund with the money from Volkswagen’s settlement fund.

The car manufacturer owes the state of Missouri $41 million after it cheated on emissions tests in 2015. That money is Missouri's share of a larger $14 billion settlement.

Volkswagen sold nearly 7,500 faulty vehicles to buyers across Missouri. These vehicles emitted pollutants higher than EPA standards and can pose a risk to public health according to the DNR.

An advisory committee must choose which which pollution reduction projects to fund next spring. Some options include replacing diesel engines in school buses and freight trains and building electric vehicle charging stations.

Other eligible projects are repowering or replacing government-owned diesel shuttle and transit buses and aircraft service equipment with more environmentally friendly fuel or all-electric engines. The department must report emission reductions generated from these projects to the source of the funding, the Environmental Mitigation Fund.

Director of the Air Pollution Control Program Kyra Moore said the department is interested to hear from the community.

“The more feedback the better, we think because that gives us a feel for what everyone wants to spend this money on," Moore said. "The advisory committee, we are asking for interested parties. it is open to everybody. So anyone that is willing to attend meetings and give us feedback we would like to hear from them."

Upcoming meetings will be held through the month of November across the state. Applications to join the settlement advisory committee can be found here.

Moore said the settlement have also sparked interest from environmental parties and private industry groups who may match funds. She said the department would be willing to put up “matching funds” to “help stretch the funds farther than 41 million.”