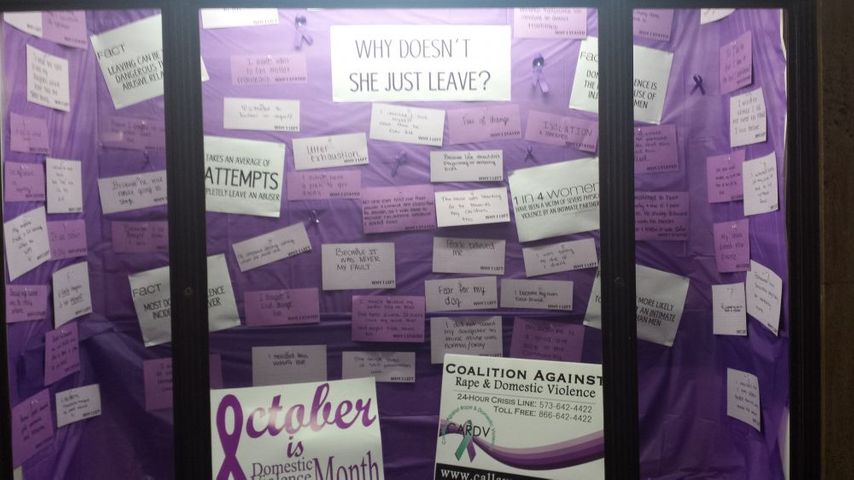 FULTON - More victims of domestic violence are seeking help, but many services were not met in Missouri last year due to a lack of resources.

"The downside is that there is about that same number who are seeking services, be it safe shelter or legal advocacy or counseling, and the programs don't have enough resources for them," Coble said.

The Coalition Against Rape and Domestic Violence (CARDV) offers services such as counseling, court advocacy and support groups for victims of domestic violence. A representative from this Fulton-based non-profit said the organization is understaffed.

"In 2013 our staff size was reduced significantly because of funding cuts and between 2013-2014 we served 10 percent more than the year before," CARDV Executive Director Erica Nanney said.

Nanney said it takes the average person 7 times to leave an abusive relationship.

“Throughout the state of Missouri we really don’t have the resources for affordable housing for a lot of families and that sometimes makes it difficult when you have to make a choice to leave a violent relationship to leave your home. The question is where am I going to go? Where will the kids and I going to be safe? So having those resources in every is a goal we have yet to achieve,” Coble said.

Some reasons survivors wrote why they stayed include:

Reasons survivors wrote why they left include:

Nanney said an important part of Domestic Violence Awareness Month is learning the warning signs of an abusive relationship.

“We know one of the big characteristics of domestic violence relationships is isolation. The victim is isolated from reaching out to friends and family,” Nanney said.

Coble said people are beginning to recognize that domestic violence is not only a crime, but a public health threat.

"Domestic violence can be deadly and it has been deadly here in Callaway County," Chism said.

Nanney said what CARDV needs the most right now to serve the most victims possible is volunteers. Volunteers can apply online.

Although resources are low, Nanney wants victims to know one important message.

“There are so many factors that make Domestic Violence Awareness Month important. I think first and foremost, one of the most important things is it being an opportunity to reach out to victims and survivors and people who are in abusive relationships and let them know you are not alone. There is help and hope and we are here for you,” Nanney said.

Victims of domestic violence can seek help through local services listed below.