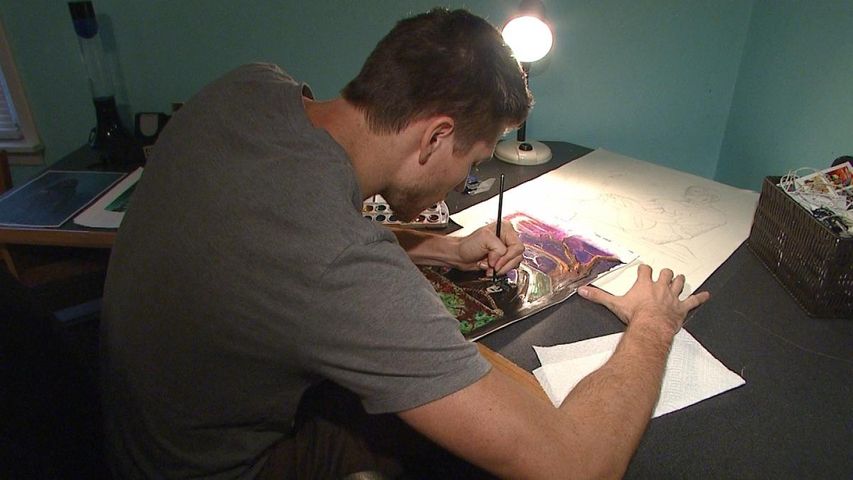 COLUMBIA - Teaching art at Douglass High School is only Adam Dresden's day job. His heart for art bleeds beyond the Columbia classroom to his Fulton home studio. There, he's crafting comics.

The characters for the comic are something his mother saved from Dresden's sixth grade imagination.

"It was a story I'd written for an elementary contest she had kept it and I was like ‘Wow, I could do something with this.' Hence, that is my comic now," he said.

It took him four years to write the "Dark Cry" series, which he started in 2009. Now, he's retelling the story visually.

"Comics these days are done 90 percent digitally," he said. "But I do it all by hand. I love drawing. I love painting."

In Dresden's comic, characters people assume are myths and legends are real, and they're plotting against the human race.

"They're waiting to overpower us and their best power is knowing that we think they're not real," Dresden said.

He submitted the story to a nationwide comic book competition called, "Ucreate Pitch 100 Competition," where people vote for their favorite story. The winner gets a $50,000 book deal.

"Someday I hope I can see little kids with lunch boxes with my characters on them," he said.

Dresden's youthful inspiration follows him to both jobs and gives the students in his art class a picture of passion.

"Make them realize they can do anything no matter what their quote on quote background is or whatever disadvantages they might have," he said. "My favorite part is putting the signature on it, knowing that it's complete and I'm happy with it."

If you want to vote for Dresden's story click here, or go to www.ucreatecomics.com. Register on the site by creating a login, then click on the Ucreate Pitch 100 Competition.
Scroll down to view all top 25 entries. Look for Dresden's entry called, "Dark Cry," and vote. Voting ends on Halloween.