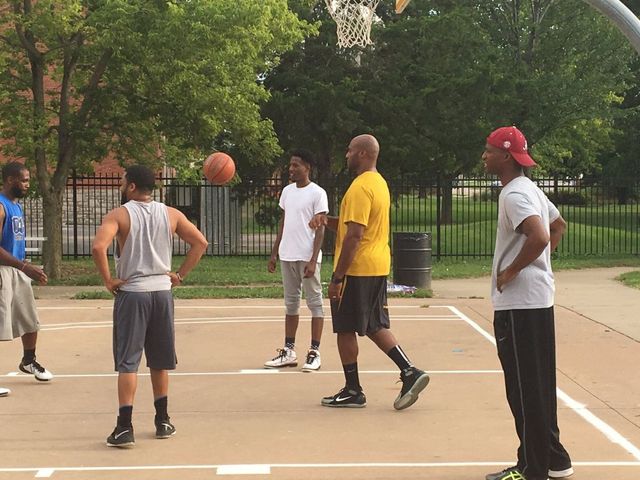 COLUMBIA - A celebrity basketball game was just one part of the first night of the “Back to School Explosion” at Columbia’s Douglass Park Thursday.

The three-day event, sponsored by the Columbia SOA Church and So Amazing Life, kicked off with the basketball contest followed by a service presentation from The Grace Tour, a faith-based organization based in Atlanta.

Dr. Ty Douglas, an MU assistant professor in the College of Education, coordinated the event in conjunction with The Grace Tour for the third straight year.

"We're really just trying to impact the community," Douglas said. "We believe that our young people have gifts and talents, perhaps that they know not of or haven't fully come to realize. We want to inspire them and we want them to know that there are folks who believe in them."

MU Assistant Vice-Chancellor Pat Ivey was one of the celebrities who played in the game Thursday. Ivey formerly served as strength and conditioning coach for the Missouri football team.

Former MU Athletic Director Mike Alden was also in attendance, but did not play.

Other planned events for the weekend include a 3-point and slam dunk contest at 6 p.m. Friday and a block party and concert at 3 p.m. Saturday. Douglass Park will host all three days of the event.

During The Grace Tour's performance on Friday, Douglas said an artist will be doing live paintings while the speakers are performing. The paintings will be a live interpretation of the speakers' words.

"We travel the country," Grace Tour speaker Jeremy Anderson said. "From the east coast to west coast, we go to different places bringing hope to people."

Anderson said the members of the Grace Tour team have all overcome hardships, including homelessness, abuse, drugs, alcoholism and prison.

"This is not just being cute," Douglas said. "They're gonna share the real realities that our young people are facing. But they also stand as an embodiment of the hope that can happen when one perseveres and connects with the resources necessary to be able to make it through the challenges that many of us face."

Douglas said he expects this to be the largest turnout since the event started three years ago, and he anticipated as many as 500 people in attendance.