Down syndrome support is the goal for one Columbia mother 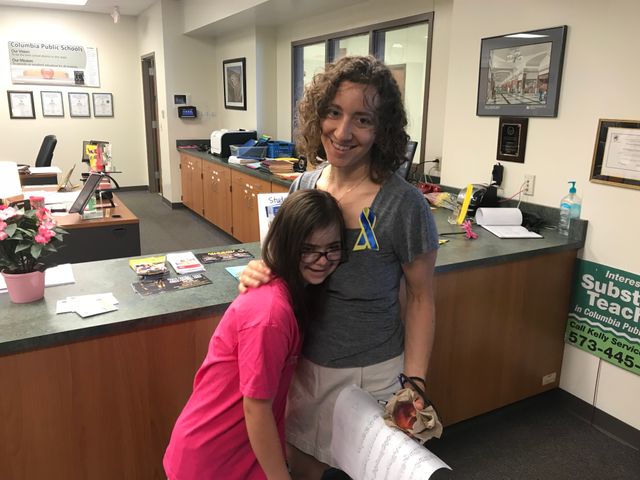 COLUMBIA - Having a child with Down syndrome is motivating one mother to help connect and provide resources to other families.

Eleven-year-old Julianna Basi is a friendly, smiling fifth grader, who likes to share fun facts about herself.

“I’m good at singing, and I’m also good at horseback riding,” she said.

Her mother, Kate Basi said Julianna is a happy child.

“She’s like this almost all the time. We have very few discipline problems with her. She doesn't take offense the way that other people do,” Basi said.

She and two other mothers in Columbia founded the Down Syndrome Guild of Greater Kansas City.

The organization's purpose is to provide resources to people with Down syndrome, their family and their supporters.

Basi said she had a difficult time meeting other parents who had children with Down syndrome when Julianna was younger.

“We didn’t have a way to connect to those families because privacy regulations both in schools and the medical community are really tight and so we had a really hard time finding other families.”

Basi said someone she knew who worked for a school district eventually helped. They talked to other families who gave their permission to share their information with Basi.

“Once she had those permissions, then we were able to get off the ground, and we just started socializing. Then we did one big kick-off event where we tried to get the word out through the media and we got a really good turn out that way, and so we’ve sort of grown from there,” Basi said.

The Down Syndrome Guild of Kansas City says it is the largest non-profit organization dedicated to people with Down syndrome.

The guild is planning a town hall Saturday to discuss expanding its services to Columbia.

“Myself and the other moms have been really focused in on trying to just create a network of families that can socialize and draw on each other’s expertise,” Basi said.

“These are things that we're going to talk about this weekend in the town hall meeting. We're gonna find out what the need is in the community, not just what we think, but what people in the community think, ”Basi said.

She said she wants people to know some of the negative assumptions about those with disabilities are untrue.

Like other children, Julianna is excited about what she gets to do in the afternoon.

“When we go home from school I do my singing game, and my game has Disney songs," she said. "It has Aladdin and The Lion King!”

Basi said many people have the wrong idea about people with Down syndrome.

"There’s a misconception out there that is: life will be less rich because you have a disability and in fact, the opposite has been true,” she said.

Basi said many parents who have a child with a disability feel their life is exactly how it should be.

"Almost all of them would say that they never realized how precious and beautiful and rich life was until they had a child who didn't fit the mold that everybody else does,” she said.

The Down Syndrome Guild of Greater Kansas City says that one in every 800 people are living with Down syndrome and over 250,000 of those people live in the United States.

The Town Hall is Saturday at the Children's Therapy Center from 9 to 10:30 am.

Childcare and a light breakfast will be provided.