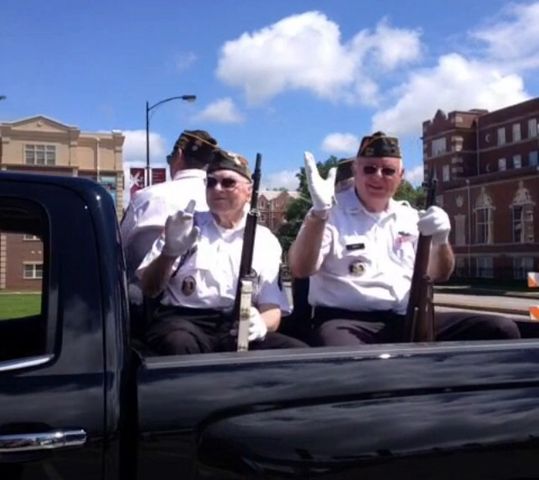 Salute.org says the parade's purpose is to "honor and remember those who served and those currently serving in our armed forces, guard, reserves, and our allies." Majority of the parade consisted of veterans and military members. Other groups in the parade included marching bands from Columbia's high schools, Daughters of the American Revolution, and the Columbia Fire Department.

"All my comrades that are here, they enjoy it," Charles Estill, a Korean War veteran, said. "There's no better feeling to enjoy your army, to enjoy your fellow members."

The parade began over an hour after its scheduled 9:55 am start time. Cloud cover and winds delayed the Golden Knights Parachute Team from jumping out of planes into intersections on Broadway, which marks the start of the parade.

"The paratroopers are just wonderful," Columbia resident Mildred Bennett said. "We waited and anticipated greatly for them to come down and land in the street."

Both participants in the parade and watchers alike shared what the holiday means to them.

"It means the world to me," Estill said. "I see guys here that I know and that I've been seeing for years."

RT @lukeslabaugh "What does Memorial Day mean to you?" https://t.co/wNYTPwKnoJ

Bennett watched the parade near the intersection of Broadway and College Ave.

"It means a day to celebrate our country, but also our fellow men who have fought and died," Bennett said. "And I think it just brings back a lot of memories from way back, from World War II and World War I. It's just great for us to see a great gathering of the community and everyone enjoying each other."

The parade ended at Fourth Street this year, as opposed to the Boone County Courthouse in previous years due to safety concerns. Columbia police requested this change so they could access their cars more easily in case of emergency.