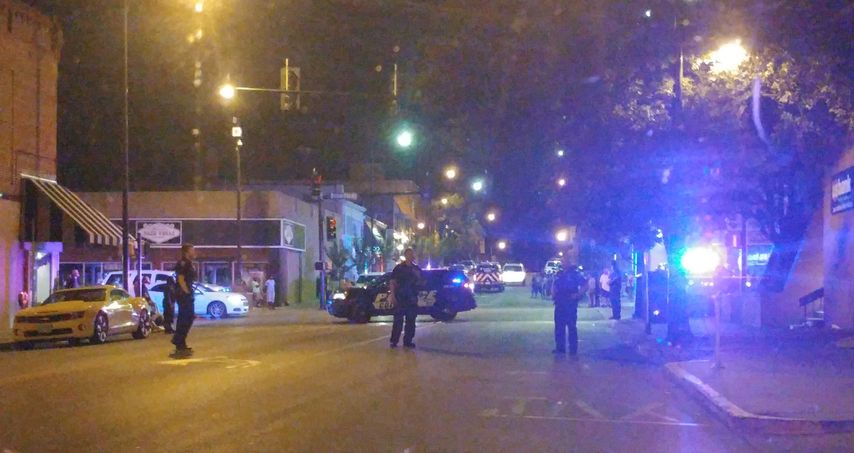 COLUMBIA - A shooting in downtown Columbia early Sunday morning sent a man to the hospital.

Police responded to a call of shots fired at the intersection of Hitt Street and Broadway around 2:15 a.m. Police at the scene confirmed one adult male was taken to University Hospital with gunshot wounds. The man's condition is currently unknown.
Witnesses at the scene said chaos ensued shortly after shots rang out in the crowded bar district.
"I was just trying to go get some El Rancho and walked up and then I saw a body on the ground and they said that there's an active shooter and the police started to shoo us all away. We started to walk back and everyone started to flee," witness Tom Lockner said.
Uber driver Danny Dodd was waiting to pick up a rider near the intersection of 10th Street and Broadway when the shooting happened.
"[Broadway] was blocked, there was already cops responding to other situations down the street," Dodd told KOMU 8 News via phone. "I was just kind of looking and next thing you know, I did see a commotion over in front of the El rancho/Slackers area. There were two men verbally going at it and next thing you know one of 'em reached and pulled out a pistol and shot the other one."

Dodd said he's noticed an increase in disturbances in the downtown area.

"It has constantly got busier downtown after 1:30," Dodd said. "I've noticed that the after bars let out [the crowd] is now starting to grow into the hundreds, maybe three or four hundred people on the streets for at least until 2:30, three o'clock."