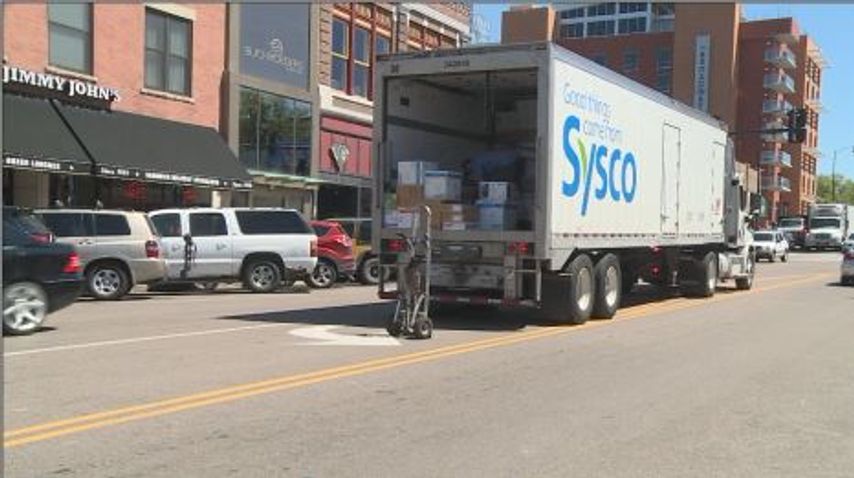 COLUMBIA - Traffic in downtown Columbia is already chaotic, especially due to the ongoing construction near campus.

Throw in delivery trucks, and you've got a recipe for delays.

Columbia's Downtown Leadership Council is calling attention to the increased traffic, asking the city to conduct a study on delivery trucks downtown.

The study should collect data on the location, times, and frequency of delivery truck parking downtown.

Scott Wilson, the DLC chair, lived in the downtown area years ago. He said traffic got worse with time and something needs to be done about it.

"Well, Columbia has gotten so big, and downtown so busy, that the trucks don't have any where else to park for their deliveries," Wilson said. "So, its become a problem, in particularly,in the busiest time of the day, which is over the lunch hour."

DLC hopes the study will confirm its prediction that the delivery trucks delay traffic downtown, especially during lunch hours. Wilson said delivering supplies during lunchtime is not beneficial to businesses either.

Katie Essing, executive director for The District, said despite the issues trucks loading and unloading downtown bring, it also means the city has a booming downtown area.

"We are very fortunate to have such a vibrant downtown. And delivery trucks are part of what we need in order for those businesses to be successful," she said.

The city of Columbia has no specific laws or limitations for delivery trucks. Delivery truck drivers have to obey the city ordinance applicable to every driver, such as having blinkers on while loading and unloading, not blocking private parkways and not blocking fire hydrants.

"The city ordinances prohibit you from parking and leaving your car running in the middle of the street. I think the city and the police overlook that for delivery trucks. But we think that it's a big enough problem that needs to be looked at," Wilson said.

Columbia Police Department Public Information Officer, Bryana Larimer, told KOMU 8 News the reason why delivery trucks can park in the middle of the street is because its drivers have no other option. However, police officers will issue parking tickets if delivery truck drivers break the law.

The DLC says even if the mayor city council do not conduct the study, something still needs to be done about it.

"If anybody can drive downtown over the lunch hour, they will see delivery trucks blocking traffic. So, I think rather their is a study or not, something needs to be done about it," said Wilson.