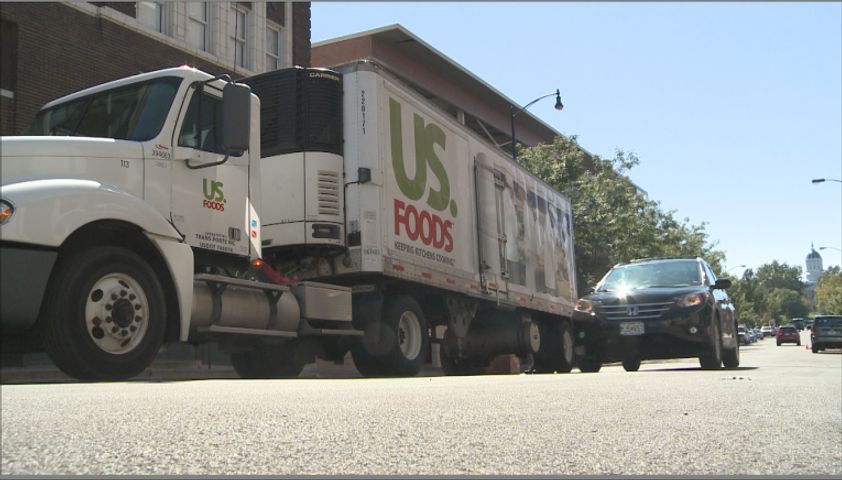 COLUMBIA- Columbia has seen several complexes and business go up in downtown the past year, but a lot of residents said they feel annoyed or at risk when driving downtown due to delivery trucks.

Business owner Nickie Davis opened her store Muse earlier this year. The new apartment complex, The Lofts on 308, opened August of this year. Davis said she has seen the increase in people.

And drivers said they can tell the difference also.

"The delivery trucks park in the middle of the street, and it's hard to go around them so that usually causes a traffic jam," said driver Jack Yarbrough.

Still, Sgt. Candy Cornman of the Columbia Police Department said the practice, "Is not generally one of those things people complain about a lot."

When KOMU 8 News spoke to drivers, however, they quickly knew about the issue.Some drivers described the problem as annoying and frustrating. Drivers also said they sometimes feel at risk when driving downtown.

"Especially when the truck is parked closer to the intersection because there's almost no space for you to maneuver around the vehicle without what's going on at the stoplight and which way traffic is coming," said driver Hadyn Bailey.

"If I can‘t see anything and there are people right behind me so I can't back up a little bit to see anything because I haven't stopped in time, it's a little scary because there are those crosswalks that people don't use anyway," said driver Anna Coleman

KOMU 8 News spoke to the Columbia Downtown Community Improvement board, but members didn't want to comment on the issue, saying there's not a solution because of the way Columbia is built.

One truck driver said trucks can be up to 8 ft. wide, making it very difficult to turn them into the narrow alley ways.

The city doesn't have a specific ordinance for delivery trucks, but one does exempt parking for loading and unloading people or merchandise. The downtown District's website does list of couple of regulations. Those include

Drivers have a couple suggestions themselves.

"Maybe they could designate certain parking spots whenever they know a delivery truck is coming if they can schedule their deliveries just as the city has done for taxis," said Bailey.

Cornman said drivers should try to be safe around parked delivery trucks.