Drivers will have to adapt to new crosswalks on College Avenue 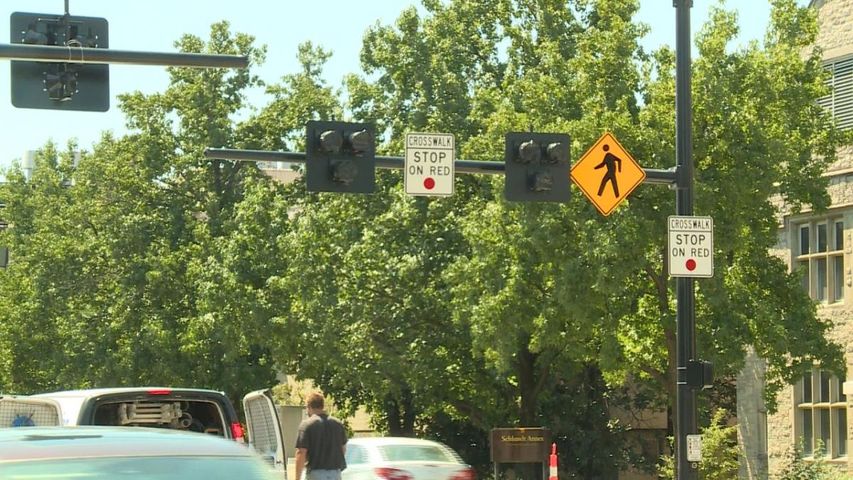 COLUMBIA - On Friday, the activation of new non-traditional crosswalks on College Avenue will force drivers to make some adjustments.

The construction of a new median and mid-block crossings on the street, that started in June is scheduled to be completed on Friday.

With the hopes of increasing pedestrian safety and decreasing motorist's worry, the city decided to add two non-traditional mid-block crossings on the street.

The new "High-Intensity Activated WalKs" or HAWK beacons are the first in Columbia.

Columbia Public Works spokesman Steven Sapp said the HAWK beacons are used at dozens of locations throughout Missouri and were recommended by MoDOT.

Sapp said they are really becoming the signal of choice throughout the nation for mid-block crossings.

The Federal Highway Administration reported that mid-block crossings locations account for 70 percent of pedestrian deaths and the use of HAWK beacons have shown a 69 percent decrease in pedestrian crashes.

The city approved the addition of HAWK beacons to the road in 2014 after a report indicated that around 19,000 cars drive on College Avenue a day with 2,500 pedestrians crossing at the mid-blocks.

Pedestrians using the HAWK beacons will still see the same signals as a normal crosswalk. Sapp said the difference will be in what the motorists see.

When the lights are not on drivers can continue like normal. When a pedestrian pushes the crosswalk button, yellow flashing lights will indicate that drivers should prepare to stop. Two solid red lights will signal to cars to come to a complete stop and only proceed again when the red lights are flashing and no pedestrian is present.

Sapp said these designated crossing points will add a lot of safety to the street and stop pedestrians from crossing in hundreds of different places all day long.

"Most pedestrians don't take the time to be mindful of walking and the crosswalk areas and it does make it challenging for those who are driving, maybe to come to a complete stop or they're surprised by people who just step out in the middle of roads like outside of pedestrian cited areas," Columbia resident Shajuanda Campbell said.

She said she has experienced the challenge of pedestrians crossing at College Avenue and hopes that the mid-block crosswalks stops the confusion but is concerned about how they work.

Columbia resident James Hopfenblatt said he has used the crosswalk on that street before and has felt unsafe during rush hour.

"I have almost been run over, even when crossing on crosswalks," Hopfenblatt said.

Hopfenblatt said he really likes the idea of the flashing lights.

"Some of them force vehicles to stop where they typically wouldn't and the lights really help make them realize there's a pedestrian attempting to cross and it saves time so that vehicles don't stop at every crosswalk when there's no one to stop for," Hopfenblatt said.

Fourth Ward Councilman and co-chair of the city's Pedestrian Safety Task Force Ian Thomas said the previous swarming of pedestrians across roads was a hazard for drivers and walkers.

Thomas the city may consider installing the HAWK beacons at different locations throughout Columbia.

Thomas said Providence Road may be one of the roads to look at and he would like to see a crosswalk about every half mile or so.

Drivers on College Avenue should also be aware that left turns onto Rosemary Lane and Wilson Avenue will not be possible any longer.

Sapp said drivers will have to get use to a different traffic flow, but it will be more of an adjustment than a traffic problem.

The total cost for the project was around $824,000 and was funded through a MoDOT grant and funds from the University of Missouri and the city.