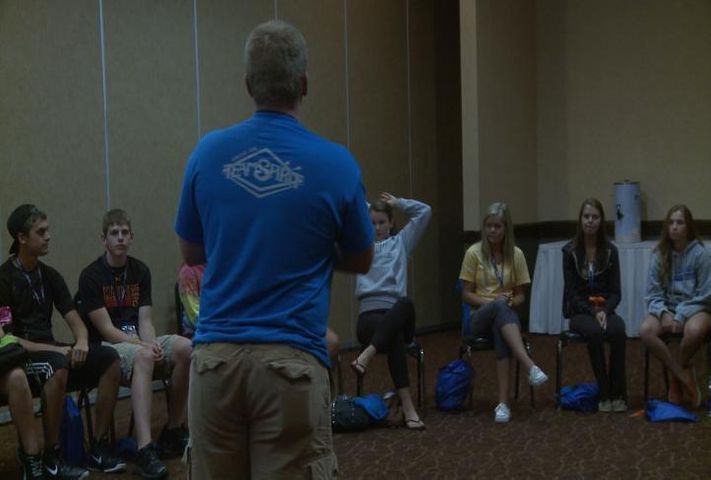 COLUMBIA - The Team Spirit Traffic Safety Leadership Training Conference started Friday at the Stoney Creek Inn.  Nearly 100 students from nine high schools throughout Missouri attended the conference to learn why distracted and drunk driving is so dangerous and what some of the consequences could be.

According to a Team Spirit handout, the conference is "designed to empower high school-age youth to take an active role in preventing alcohol and other drug use, leading to the impaired driving that accompanies such use."

The organization's main goal is to motivate and empower the youth of Missouri.

Many of the teenagers know someone who was hurt or killed in an accident.  One of the high schools involved in the program lost three students in the spring semester alone to separate motor vehicle accidents.  Two of the accidents happened within one week of each other, according to Lana Romaine, a representative for Northwest High School in Cedar Hill, Mo.

One of the activities they did today was the mock drunk driving accident.  Conference participant Hannah Kaletta described what she felt during the simulation.

"The whole time I had goosebumps. I put one of my best friends like on the hood of the car. Me being the person watching or the person involved that's alive and then seeing someone who you care about so much just dying in front of you because they didn't have their seat belt one or they weren't paying attention," said Kaletta.

Fellow participant and classmate, Lee Strande, said that one of the most effective activities she took part in today was a shoe exercise.

"We did a shoe exercise where somebody, every time they mentioned somebody's name a 16-18 year old kid who was killed in a car accident they brought up a pair of shoes and it ended up being 44 kids and that really touches your heart and makes you realize you could be one of those names," said Strande.