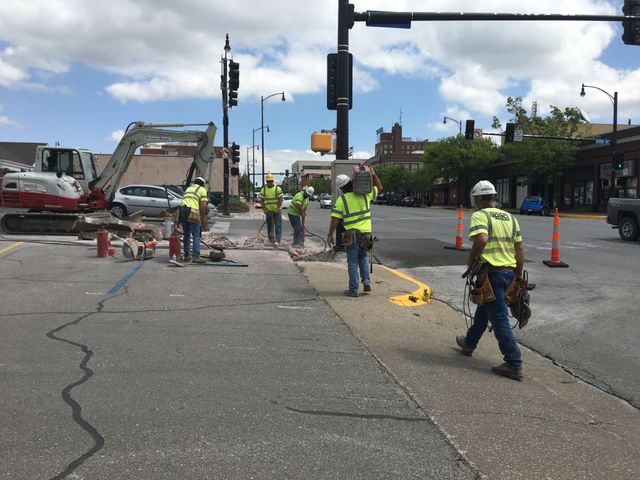 COLUMBIA – A new construction project has started to close sidewalks downtown in order to upgrade crosswalk ramps and prepare for repaving.

The East Broadway Pavement Project began Monday at Fifth Street and Broadway and will later affect sidewalks along Broadway at Fourth, Sixth, Eighth and Ninth streets.

The project aims to upgrade sidewalk ramps so that they are in compliance with the Americans with Disabilities Act.

“We’re doing those at all the intersections because later this summer we’ll be coming in and doing a repaving project,” Sapp said. “So we’ll repave Broadway all the way from Providence to Hitt Street.”

Sapp says the ramps have to be completed before any repaving is done.

“When we repave a street now, the requirement is that all of the grade crossings have to be ADA compliant,” Sapp said. “Because there’s always a possibility that we’ll be changing that grade slightly during repaving, we need to make sure that those are in good shape before we start to repave the project.”

Chuck Graham, Chair of the Columbia Disabilities Commission, said the ramps downtown are in need of the upgrades.

“Some of the older curb cuts aren’t angled correctly where you can bottom out when you hit the street,” Graham said. “This will be a much more accessible design that allows people to have safety and access to the sidewalks."

Sapp said the repaving construction will happen at night to avoid heavy traffic. He expects the project to be completed by the fall.

Graham said he is impressed with the changes the city is making for residents with disabilities.

“I’ve been impressed by the improvements, especially with the parking improvements with adding several parking spots on Broadway because there just wasn’t much disabled parking in the shopping area downtown,” Graham said.