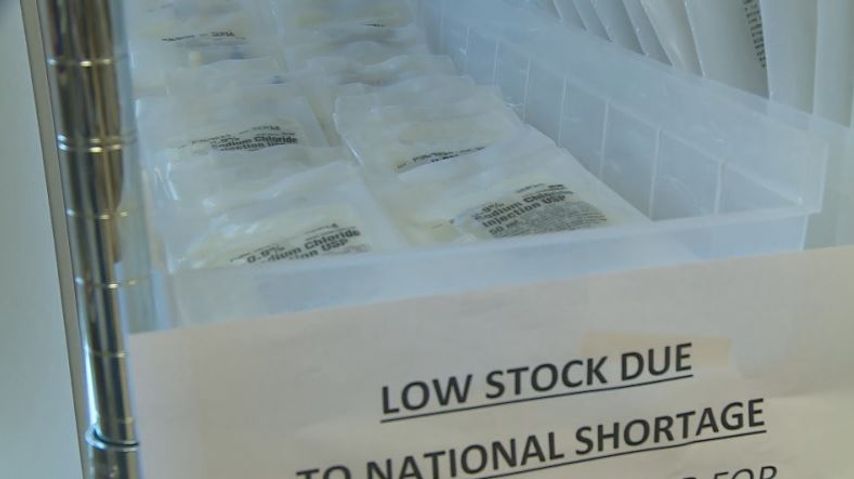 One reason for the shortage: Hurricane Maria knocked out power for weeks in Puerto Rico, one of the largest manufacturers of IV fluid bags.

IV fluids are used to help hydrate patients or give medication. Lake Regional Medical Center Director of Pharmacy Mike Dow said both of those things are often needed for flu patients, which there are a lot of right now.

"A lot of times their blood pressures are very low, so when they're admitted it's really a serious health concern," Dow said. "So not only are we fighting low blood pressure with drugs that treat that, but also just getting more fluids into the patient helps them feel better."

The center doesn't have enough of the bags sized to administer medicine, but it's getting creative. Dow said staff is taking fluid from each of the low-stock one-liter bags and pumping it into 20 of the smaller bags.

"They are not just as available as they used to be," Dow said. "We can still get some, but we can't get enough to meet our every day needs."

Lake Regional is constantly trying to find the bags for purchase.

"We work the phones every day," Dow said. "It's a day-by-day issue for us because, whenever we can get some supply, that means we don't have to make as much in-house. But as soon as that supply dries up, which it does, then we have to revert back to making our own."

Boone Hospital Center is experiencing an IV shortage as well. The hospital's parent company, BJC HealthCare, said it is a "serious concern" for health care providers.

The company said in a statement "the manufacturing shortage impacts essential pharmaceutical products used in hospitals and health care environments on a daily basis."

BJC HealthCare said patients have not been impacted by the shortage, but are monitoring and optimizing their inventory.

MU Health Care in Columbia said it's been closely managing its stock of IV bags over the last several months. Staff there have twice daily meetings to talk about supplies and needs.

St. Mary's Hospital in Jefferson City said it's also keeping a close eye on things, but it hasn't been impacted by the shortage yet.

Dow said he is hopeful plants will be back up and running in the next three months.