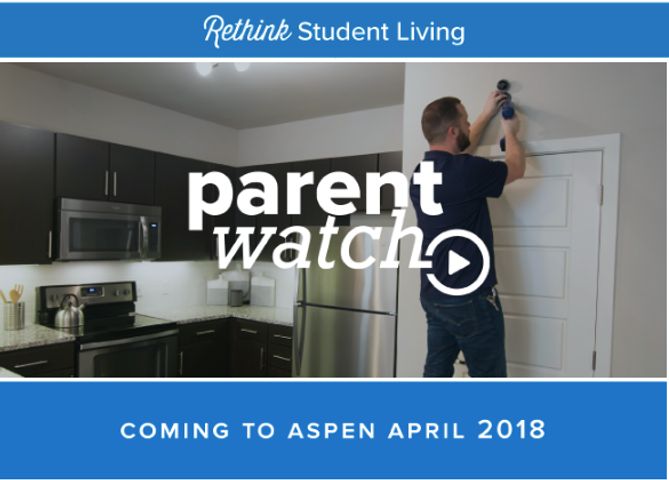 COLUMBIA - Residents at a student housing complex said a prank from management was too believable to be funny days before April Fools.

"I opened an email and they [Aspen Heights] said that they were implementing some new camera system for 'Parent Watch.' They were saying it's a difficult transition for us to leave our parents, so they were going to set up some program for our parents to be able to watch us 24/7," Resident Keyaire Marshall said.

The prank came in the form of an email that introduces "Parent Watch," a fake program in which every house would have a monitored security camera installed.

At the bottom of the email was contact information (phone number and email) and a blue button, which led users to a website with a video demonstration of the cameras in action and answers for frequently-asked questions.

The email said the cameras would allow parents to keep a close watch on the students.

"We understand the transition of living at home to living at a student community impacts parents just as much as students. It can be tough for a parent to go from seeing their student every day to just receiving a call from time to time," the email said.

LaTonya Marshall is the mother of a resident as Aspen Heights. She didn't see herself using the cameras if they were actually installed.

“A baby monitor is really the last thing I want installed. I’ve had enough time to get used to the transition," Marshall said. "I really don’t want to know what he and his college roommates are up to 24/7.”

The email also said the cameras would be installed in every house by April 2 and residents could choose an option to not participate.

"Participation in Parent Watch is not mandatory. However, every home will receive video cameras regardless of activation," an online FAQ page said.

Resident Lucas Elliott said he saw the email after another resident notified him. He said they were both stunned.

"My buddy texted me and said, 'What the hell is this?' We both wondered if it was a joke, so he tried to call and call, but no one would answer," Elliott said.

He said his consistent negative experiences with management led him to believe the joke was a real new feature.

"Part of me feels stupid for even believing in it, but at this point, everything that they've done to us? I don't feel like they've personally attacked us, but everything that's happened to us? I felt like that was believable," he said.

Elliott said there was not even a hint that it might have been an April Fools joke.

"The office is closed for the weekend, so there was no way to get in touch with the office to get a clear message on it," he said.

Marshall said she didn't think it was a joke because it was too far out from April 1.

“It didn’t occur to me that it could be a joke because it wasn’t on April Fool’s Day, so it didn’t hit me that it would have been an April Fool’s joke," Marshall said. "I couldn’t comprehend what even made them think that was a good idea.”

Elliott said he is nervous about saying much more than that because he still has to live at the complex.

Resident Alexa Ninichuck said a specific part of the email made her more nervous than anything else.

"My main concern was just the initial video that popped up: two in the living rooms, one in the hallway and one in the bedroom. And to me, that's the equivalent of putting a camera in a dress room," she said.

Marshall is also a lawyer in Sedalia and said if cameras were installed it would be against multiple laws.

“It’s breaking Missouri and federal law it’s more of a common sense thing and I thought, ‘Okay they didn’t run this by their legal counsel, they don’t have legal counsel, or their counsel is inadequate' because it was just wrong on so many levels,” Marshall said.

Both the demonstration video and FAQ page were taken down later in the afternoon and replaced with a page that reads, "Happy April Fools."

"For them to even redact that multiple hours later, that's too late," Ninichuck said.