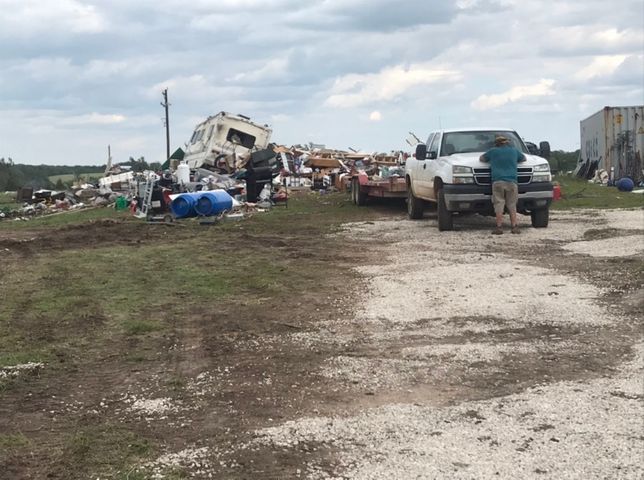 ELDON - While cleanup from last week's tornado is still on going, the next step for Eldon residents is getting through the insurance process.

One resident, Roy Reid, said his insurance company showed up to his property the 23rd, the day after the tornado hit. He now is working on listing items he can remember from the property to cover.

Before the storm he had a warehouse. Now that is completely gone. And the RV he was sleeping in now sits on the rubble still left on the site. He says luckily he woke up shortly before the storm's sirens blared. A tree flew into the side of his RV right where his bed had been.

"I pretty much lost everything," Reid said. "But I'm alive."

Reid said Eldon has turned into a tight-knit community as everyone tries to help out. He's had about a dozen friends and neighbors out to sort through the rubble and valuables left from the tornado.

"The insurance company's been great, but that's where we're at. Put it back together," he said.

But some in downtown weren't this lucky with insurance responses.

Historic Randles Court had the roof blown off in the storm, which is similar to many of the surrounding businesses. They have been told the insurance company will be out next Tuesday.

The hotel was planning a grand opening for newly renovated rooms just in time for Memorial Day weekend. The ceilings of some of those rooms have mostly fallen in and they are unsure when or if they will get things up and running, but Hart said she's hopeful.