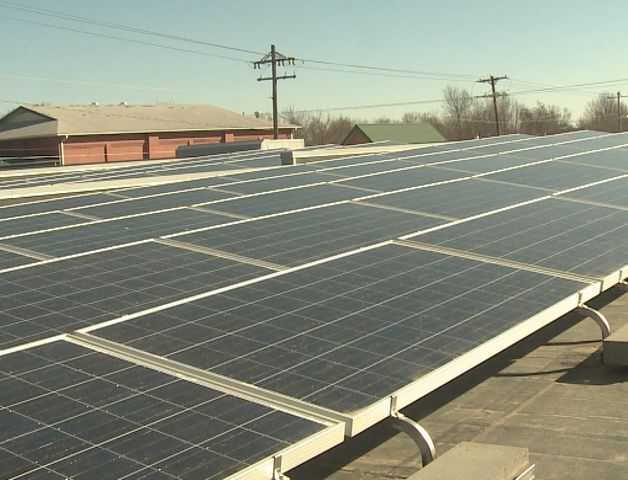 ELDON - Eldon Furniture took its first step in going green by turning on the 80 solar panels that are installed on the company's roof for the first time on Feb. 26.

John Caine, the owner of Eldon Furniture, said he got this idea after going to a seminar sponsored by the Eldon Chamber of Commerce in which representatives from Brightergy spoke.

Brightergy is a renewable energy service provider that offers its customers installation and maintenance of solar panels.

"We set up some appointments and worked on it and they made a package that was affordable for me and with a nice projected payback, and so it was a very positive step I think," Caine said.

Lou Brouck, the Vice President of Marketing and Client Services for Brightergy, said the company was a pioneer of leasing solar panels.

"Brightergy introduced a leasing plan with solar panels and it was one of the first in the state of Missouri and afforded our clients the opportunity to actually install solar panels on their buildings without any upfront cost," Caine said. "That was a key differentiator from Brightergy and other suppliers."

The company installed a 23.5 kw system on Eldon Furniture's roof with solar panels that are about three feet tall and five feet wide.

But Eldon Furniture isn't the only store on Maple Street that has solar panels on its roof. Eldon Drug, just down the street from the furniture store, installed its solar panels in June, 2013

Miranda Henley, the owner and pharmacist of Eldon Drug, said this was also the store's first step to becoming environmentally friendly.

"We have an older building so it cost a lot to run the building and as far as energy," Henley said. "We were trying to look for a new way or a new source of energy and a way to save us money from our Ameren bills."

The drug store has a total of 127 solar panels on its roof with two different systems. Both systems serve the same function but one system has fewer panels than the other.

Since it turned on these solar panels in mid-August of last year, she said the business has saved about $2,100 to $2,200 up until now.

Brouck said the three systems on Maple Street prevent about 112,000 lbs. of carbon dioxide from being released into the atmosphere, which is equivalent to about 2,000 trees growing for 10 years.

Both Caine and Henley said they haven't taken any other initiatives to go green. Caine said he's been approached by other companies but hasn't made any definite decisions yet.