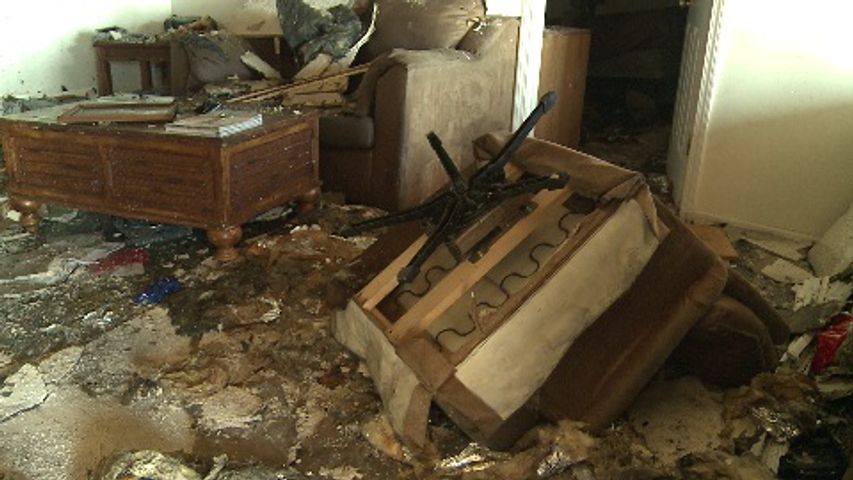 MILLER COUNTY, Mo. - Despite a destructive fire that totaled an apartment building near Eldon, Mo., residents remain hopeful about the situation.

Officials responded to the fire off Doyle Road near Eldon yesterday afternoon. The apartment building had four apartments and either fire or water damage ruined every apartment.

Residents say the fire started in apartment 4 in the back, upper-left corner of the building. The fire left nothing but charred wooden supports and blown-out windows. Apartment 2, in the opposite corner, was not damaged much by the fire, but sustained enough significant water damage to drive out its residents.

Roger King, who lived in apartment 2, says he and some bystanders grabbed whatever they could and hauled it out to the parking lot before the fire could damage it. He also says he was already planning on moving but was waiting until the right time.

Despite losing their homes, however, the residents were mostly concerned about being separated from their neighbors.

"We were just like one big happy family," Sheryl King said. "Norm (another resident) would always bring over his sweet corn bread for us, and we would bring him stuff."

Roger King, her husband, then chimed in, saying, "But we've got each other's numbers so we'll keep in touch."

The fire injured one firefighter, a man and infant. Roger King says the firefighter and infant were released from the hospital last night, and the man received burns to his hands and inhaled dangerous levels of smoke. Officials still have yet to release the names of the victims or the cause of the fire.