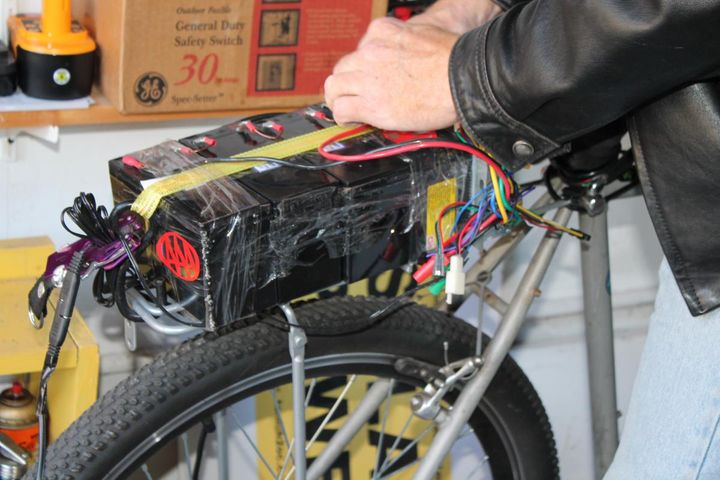 COLUMBIA - Tom O'Connor said he whisks by other cyclists in the bike lane as if to say "see you guys later." But it's not because O'Connor is a superhero cyclist, in fact he said he's the opposite. He's able to get more places quicker than ever before because of a new addition to his bike...a battery.

O'Connor recently invested in an electric bike starter kit. He ordered the kit on the internet for about five hundred dollars and retrofitted his old mountain bike with an electric battery.

He was originally turned on to the concept by his friend Ted Curtis, former GetAbout manager.

"Once you try it, you really get it," O'Connor said. "I rode the bike around a little bit and I thought I've gotta have one."

"It bridges a gap. A lot of people say the physical exertion of biking to and from work can be exhausting, you get really sweaty, it messes up your hair all those type of things," Simonson said. "So the number of people that bike to work for transportation is increasing because these bikes are essentially erasing the hills for them."

An electric bike still has all of the same features as a regular bike but if a rider is feeling tired or wants an extra push, there is an option to press a throttle and get added assistance riding. Some electric bikes can go up to 20 miles per hour.

O'Connor said he tries to use the bike as much as possible because he finds it to be efficient.

"Pretty much every trip around town less than four or five miles from the house I tend to go to the bike first if the weather is good and if I don't have to carry a TV set or anything. I'll take the bike whenever I can," O'Connor said.

And he said the trips on his bike are virtually free and help to conserve energy. O'Connor charges the electric bike in his garage. It takes around 2-6 hours to be fully charged.

"It's like a penny a trip in electricity," O'Connor said. "Oh, actually it's free because we make our own electricity. So it's pretty much free and pleasant transportation."

The O'Connors have solar panels lining their yard to create the energy used in their home.

Simonson said the savings from using an electric bike can be great for a family.

"Its roughly estimated between $7,000 and $9,000 each year to own a motor vehicle," Simonson said. "Most homes have more than one motor vehicle so if you could reduce even one motor vehicle from your home and have someone biking some of the year or car sharing, and using public transit, I don't think many people would argue that yes I would like $7,000 to $9000 more each year."

Columbia received a grant in 2005 to make the city more bike-accessible. Since the grant, the city has put in bike lanes around town and added several sidewalks to try and encourage biking or walking as forms of transportation.

Simonson said the more "bikeable" a community is, the more economically viable.

Cycle Extreme is one of only two bike shops in Columbia that offer electric bikes for sale.

"It allows us to take away some of the objections people might usually have to riding a bicycle," Owner of Cycle Extreme Tom Brinker said.

Brinker said people usually complain about getting tired before or after work or living too far away to ride in to work but he said an electric bike takes away all of those complaints.

Despite the growing popularity, sales for the electric bikes haven't been as large in the United States as they have been in European countries.

According to The Guardian, a UK newspaper, 150 million people had electric bikes in China in 2013.

"I think it's a learning curve at this point," Brinker said. "I think people need to know and understand that there are other options out there to get around."

He said communities in the United States tend to be more spread out than in European countries as well so that could have an effect on the amount of people who are willing to bike as a form of transportation.