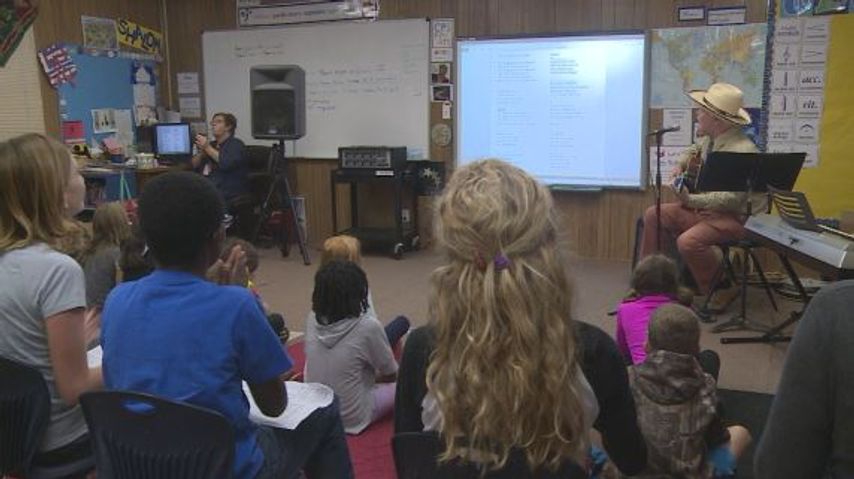 COLUMBIA – Elementary school students in Columbia gathered in their music classes Tuesday to learn about blues music ahead of the Roots N Blues N BBQ Festival this weekend.

Blues in the Schools, a program by the Roots N Blues N BBQ Foundation, sends music educators to schools to teach them about blues music and culture. Grant Elementary was the first school to participate in the program and is celebrating its tenth anniversary this year.

“This has become a week that we all look forward to and it’s a great way to start the year off,” Grant’s music teacher Pam Sisson said. “It really does build community.”

Grant Elementary’s weeklong artist-in-residence is TJ Wheeler. He said blues music can play an important part in a child’s life.

“You’ve got to sing the blues to lose the blues,” he said. “The blues is really at the very core of the foundation of so much American music of the last, basically, 120 years.”

Sisson and Wheeler’s teachings focus on blues artists from Missouri, who Wheeler said have been a foundation for the genre but are often forgotten.

Wheeler thinks Blues in the Schools is one of the only ways a child could learn about the blues.

“Where else are they going to get it? Mostly you find blues music on non-commercial radio stations,” he said, “and you’re not going to see very many music videos.”

Sisson said students have written about 15 songs with Wheeler’s help over the past 10 years.