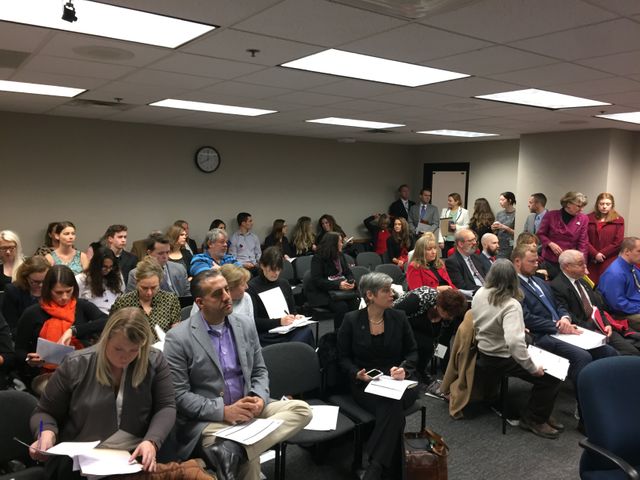 One measure, called the heartbeat bill, would make it illegal for a woman to get an abortion once there is a heartbeat detected in the fetus.

According to the bill's sponsor, Rep. Nick Schroer, R-O'Fallon, a heartbeat can be detected six weeks into pregnancy.

Erin King, an OBGYN from St. Louis, who is against the bill said six weeks is the earliest a heartbeat can be detected. But, she said, the bill is nearly a total ban on abortion, because most women do not find out they're pregnant until after six weeks.

"As a gynecologist, I see patients all the time who at least need to have the conversation about whether abortion is an option for them early in pregnancy and this would eliminate that chance to even have that conversation," King said.

She said mothers would rarely be able to find out if their fetus has a lethal problem or other health issues at less than six weeks. King said that effectively means women would not get a choice to have an abortion.

Among those testifying was Jennifer Box, who was pregnant with a girl named Libby before she got heartbreaking news.

"We learned at about 13 weeks pregnant that our very wanted third child had a chromosomal anomaly which is considered a lethal condition," she said.

Box and her husband said they decided to have the pregnancy terminated to save their unborn girl from a lifetime of pain, in the highly unlikely event she did survive.

“I think that’s my primary job as a parent is to protect my children, and with Libby we felt like we could protect her from a life of suffering by ending her life before that agony began," Box said.

If the heartbeat bill had been in effect at the time then Box and her husband would not have been able to make that choice in Missouri.

Box said she is now fighting this bill so every parent has the choice she was given.

“The honor of my life is to fight in my daughter’s name," she said.

Schroer, who has two children, said his daughters have strengthened his resolve to fight against abortion.

"It's made me value life a heck of a lot more being a father of two beautiful daughters and I'm going to continue this fight because I know, without them in my life, I wouldn't be the same person I am," he said.

Schroer thanked the women who come forward to testify Tuesday, but said he would have liked to hear more from men.

“The other side talks a lot about the choice of a woman, but when do these children have a choice?" Schroer said. "Somebody has to speak up for those that don't have a voice.”

Schroer said he is willing to work across the aisle to make the bill palatable for both sides, but will not stand for abortion.

King said, for her, it's all about allowing women to do whatever they feel is right for themselves and their families.