EmVP: Boy saves allowance to buy gifts for other kids 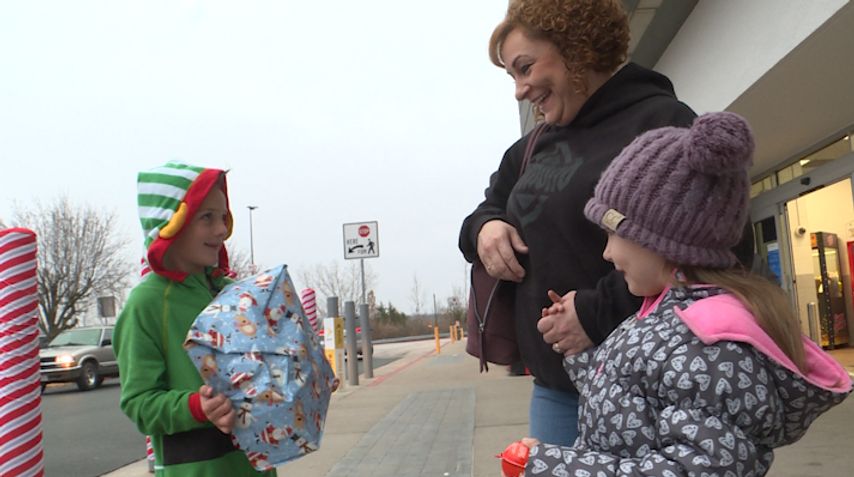 JEFFERSON CITY - For three straight years, 7-year-old Landon Connally has used the allowance money he's saved that year to go Black Friday shopping. But, he's not buying gifts for himself.

"I feel better if other people get gifts instead of me getting gifts," Landon said. "I like to bring smiles to people's faces. I love whenever they smile because it gives me a really good feeling inside."

He's buying toys to give to other children. After he wraps them all up with the help of his family, he gives out the gifts to boys and girls outside stores like Walmart and Target.

"We've always known that he has a big heart, so we're just glad that he thinks of others before he thinks of himself and he's a selfless person," Landon's mom, Rhonda Connally, said.

He calls his annual tradition "elfing."

"The first year he wore his elf pajamas so then he just started calling it 'elfing,' which is what he refers to it as now," Rhonda said.

The second grader came up with the idea after watching a video on Youtube of people leaving gifts on random door steps. He decided he wanted to give like that, too.

"Then they pass it on to other people and then one day the whole entire world is going to be giving gifts," Landon said.

He labels each gift he wraps with a post-it note listing what toy is hidden inside so he can pick the perfect toy for the boy or girl he's about to surprise.

Parents of the children who received the free gifts were confused and stunned.

"I was shocked, but it was very sweet and I thought it was very kind," Rebecca Lynch said, whose grandchildren got gifts from Landon. "It's nice to see young people in particular spreading Christmas cheer...and I hope that it impressed upon my granddaughters the true meaning of Christmas."

The children who got the presents were giddy with excitement.

"He said, 'Merry Christmas!' and gave this to me," O'Jaini Adams said. "I don't know what it is, but it sure looks cute."

"It is perfect, look at him. He's so adorable, I wish I could give him something back," Jacquise Blockcon said after her daughter received a gift.

For some parents, the generosity was overwhelming knowing that it came from a young boy who wanted nothing in return.

"Some people struggle," one mom said through tears. "It's a struggle to give to their kids and every little bit helps, you know, little things give you hope."

Landon's parents said their child's act of kindness is what the season is all about.

"It's more about spreading the Christmas cheer, trying to get everybody back to that. Because it seems like it's more about shopping and not just the joy of the season," Landon's dad, Russell Connally said.

It's a reminder we could all use this season of giving. And, who better to give that gift than a 7-year-old elf.

"I think it's really amazing," Ivie Helton said after her daughter got a gift. "There's a lot of bad things in the world today, but this put a smile on my face and kind of hit me right in the feels too."

Landon saved $450 this year to spend on gifts to give to others. His parents said he gets $10 a week and he can decide every week whether he wants to spend it or save it. So, that means 45 different times in the past year Landon chose others over himself.

"I really hope they feel really, really happy inside," he said.

It may not come as a surprise that Landon's parents know a thing or two about service. The couple met while serving in the military in Afghanistan and his dad continues to serve in the Missouri National Guard.