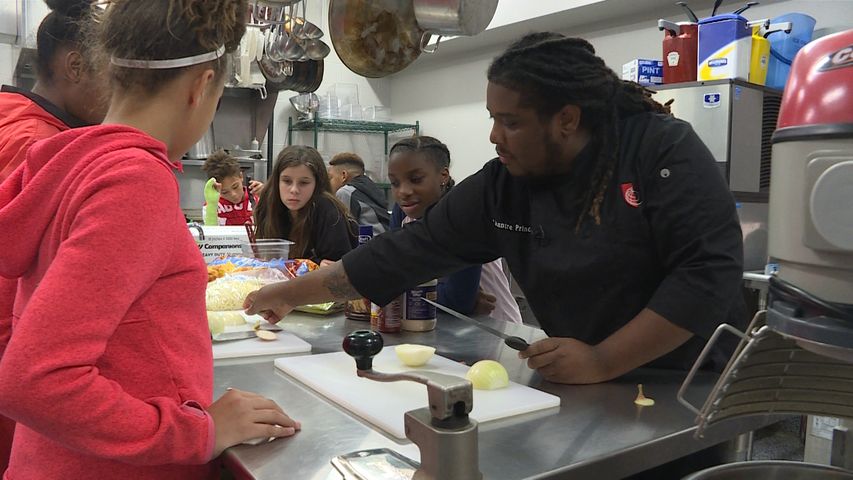 COLUMBIA - If food is the ingredient that binds us together, then D'Auntre Prince knows how to make a connection.

"Food brings people together like no other, food it just makes people happy," Prince said.

The 22-year-old is a chef at Olive Garden and recently graduated from culinary school in St Louis. Prince got his start in the kitchen at the Columbia Career Center.

He said his grandpa served as a cook in the army and inspired him to want to cook, too.

"The best part about being a chef is eating," Prince said with a laugh.

He can also add business owner to his title. This summer he opened his very own food truck called Scooter's Food Joint serving up everything from burgers to philly cheese steak egg rolls.

"I found [the food truck] on Facebook market, I went to Boonville to get it," Prince said.

It's an old FedEx truck turned into a mobile restaurant.

"Scooter is my nickname," Price said. "My brother called me that and it just stuck."

For Prince, it's also a dream come true.

"I didn't expect to have a food truck at 22, but just a lot of help from people around the community."

This recipe for success has some special ingredients and you'll find one of them just off of Columbia's Business Loop.

"Boys and Girls Club helped a lot, when we got out of school we got help with homework, we had tutors," Prince said.

Once a club member himself, now he is returning the favor with some flavor by helping teach culinary classes two nights a week.

"Not only is it teaching life sills, but it's STEM related, there's so much science and tech and math involved," Livingston said.

She said Prince was a top candidate for the job.

"That very personal connection and relationship makes him a very powerful mentor," she said. "It means a lot to these kids to hear that you can become a chef, too."

"He's a good person to look up to," Mickel Hall said who attends the club. "I'm trying to be a chef when I grow up and he's a chef."

They say people who give you their food, give you their heart. And, two nights a week that's exactly what Prince gives the students at the Boys and Girls Club.

"It makes me proud that they want to be in here and they have fun cooking," Prince said. "I hope they just think about that they can have different career choices, just not one thing about football or basketball, that they can cook and have a lifestyle."

"We want to recreate that dream for kids that you can do whatever you want," Livingston said.

Prince also hopes to one day open a restaurant along with his food truck.

Livingston said the club is always looking for people like Prince to share their time and talents with the students.

For more information about Boys and Girls Club of Columbia, click here.