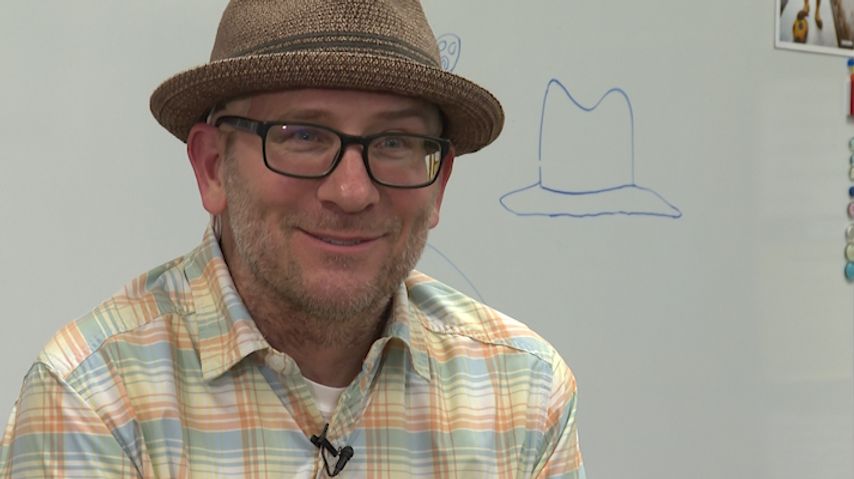 “You have to be energetic to be around them the whole time, so it keeps me going," Morgan said.

Like any good novel, Morgan's story has a theme and his is perseverance.

“The hardest part is really my family and stuff. I’m a really independent person, so having them have to work their life around me sometimes.”

You could say the plot is the fight for his life.

“I was diagnosed in May of 2017 with glioblastoma, it’s a form of brain cancer," Morgan. "I knew after my surgery that’s the main thing I didn’t want to hear.”

Over the past three years, even the worst of news hasn't kept him from the classroom.

Morgan said the best part of his job are "the students and that I get to talk about something I love.”

But, cancer has meant wearing a new accessory.

"You know, I’ve never worn hats before. So, I figured if I’m going to wear a hat, I’ll wear a hat," Morgan said with a laugh.

His hat covers up a device called an Optune. It treats his disease by producing wave-like electric fields that slow or prevent cancer cells from multiplying.

“We always joke that it sounds like it’s either from the middle ages or the 25th century," Morgan said. "It helps without making you sick or making you tired.”

He said using the Optune on top of other more traditional cancer treatments seem to be working.

Now, let's introduce the supporting characters in this story, Morgan's students. For them, it's his character they notice.

“I think about that every single day, just that he goes through so much out there and still comes here with a smile every day. That means a lot to me," Konnar Jones said, one of Morgan's students.

Turns out the students in room 240 were paying extra attention.

"I take everything he has to say probably more seriously just because if he’s preserving to say it, then it probably means it’s important," Stanley Thorpe said, another student in Morgan's class.

That novel idea is this story's resolution, where Morgan's teaching goes far beyond books.

“Just to not give up. Like when something’s hard or something’s difficult, we just give up and I think he’s a pretty good example of how not to do that," Jones said.

Little did Morgan's students know, they're a big reason why.

“That they know how much I appreciate that every day, that it’s kept me healthy over the past few years," Morgan said. "I owe them for that."

After more than 20 years teaching, Morgan decided to retire this summer. He said he's focusing on his health and spending time with his wife and two children.