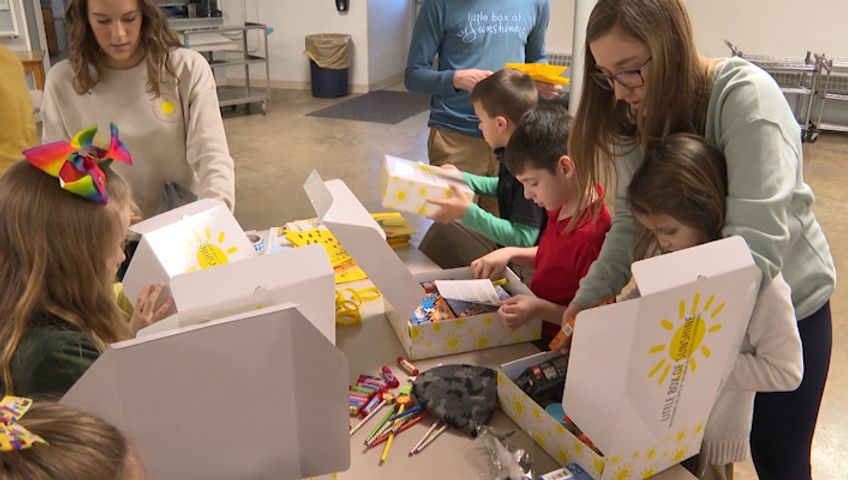 JEFFERSON CITY – When recent high school graduate Olivia Hennon went to visit her friend, Margret, in the hospital in 2016, she noticed something. She saw children in their rooms waiting to get better, but they were all alone.

“Those were really the kids that made me think what can I do to help them because I can’t go into their rooms, I can’t sit with them, but what can I give them?” Hennon said.

She decided to give them sunshine in a box.

“I started Little Box of Sunshine in 2016 just as a project to just bring joy to children in hospitals who are suffering,” Hennon said.

Her non-profit puts together brightly colored boxes stuffed with goodies from card games to fuzzy socks. It costs around $25-$30 per box.

Since starting the non-profit, Hennon and her team have delivered about 1,500 boxes.

“21 hospitals in 17 states. So, we’ve done a lot of Northeast states, a few Midwest states,” she said.

One of those boxes went to first grade student Chedon Welsh.

“I went to the hospital, because I had to get my eyes fixed,” Welsh said. “I got a football, and a coloring book and markers.”

He said the box made him happy and a little less scared.

“Going into surgery [scared me],” he said. “Because they had to put a mask over me and I had to go into another room.”

His class at St. Martin Elementary School helped fill boxes with goodies for the organization in February. Students went through an assembly line filling up the boxes with games, crafts and handmade cards from their class.

“It’s even more meaningful for them. They watched one of their classmates go through a difficult time and they saw the happiness that [the box] brought to him and so, building these for other kids is very real for them,” first grade teacher Shannon Schroer said. “It allows them to think about others and put others first.”

“If I can make even just a few children’s hospital stays easier for them and their families then it’s totally worth it,” Hennon said.

Due to the COVID-19 pandemic, she said fewer hospitals are accepting deliveries. She said Little Box of Sunshine is still actively working to get boxes in the hands of children at hospitals.

Hennon just graduated from Helias Catholic High School in Jefferson City this May. She plans to attend the University of Missouri-Columbia in the fall and major in elementary education.

If you’re interested in helping Little Box of Sunshine and its mission, click here for more information.

Columbia businesses don't have to refuse service to unmasked customers
COLUMBIA—About 20 people filed complaints about other individuals or businesses not following the mask ordinance this weekend, according to the... More >>
44 minutes ago Monday, July 13 2020 Jul 13, 2020 Monday, July 13, 2020 7:19:00 PM CDT July 13, 2020 in News
Share:
Email
Facebook
Twitter