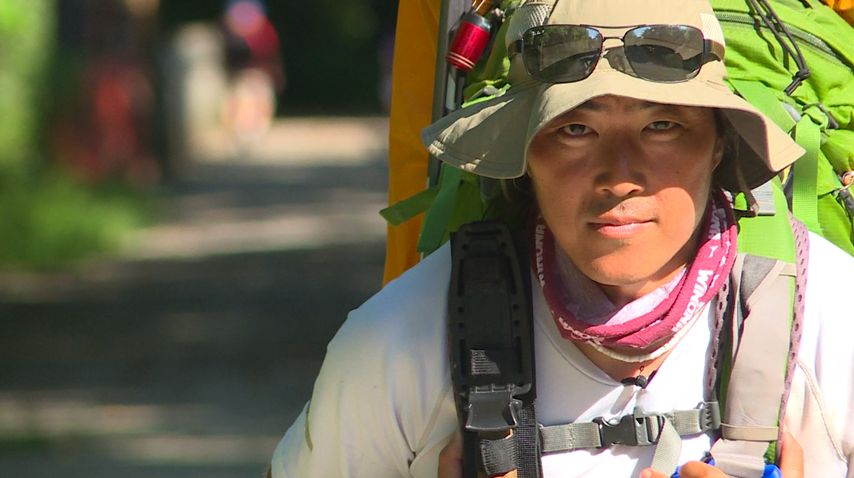 BOONE COUNTY - Keith Doubman, 40, is on a mission to walk across the entire country.

“I'm backpacking across the U.S. by myself to try to raise money for cancer research," Doubman said.

He started his walk in Delaware and plans to end in San Francisco, California. He’s about 2,000 miles into his more than 4,600 mile journey.

Doubman made his way through mid-Missouri in August where he walked on the Katy Trail along the Missouri River.

“The Katy Trail is a fabulous trail. I definitely love walking on it,” he said.

His journey is personal. He chose cancer research after losing his father to cancer four years ago.

“My brother-in-law said, ‘Hey, you should do it for a cause that you believe in,' so I was like, ‘Alright, let’s do it for cancer.’ You know, dads are dads, so very close to my heart.”

Family means a lot to Doubman.

“I was adopted when I was 7 years old from South Korea,” he said. “I feel like I won the lottery with adoptive families."

The hardest part about losing his dad to cancer was when he got the news. He was teaching English overseas at the time.

"I guess the toughest thing was probably getting the phone call. And just hearing my mom just tell me that he passed. And, I couldn't do anything about it because I was so far away,” Doubman said. “I felt helpless.”

He’s on his second pair of walking shoes. He had to switch to a new pair in St. Louis after he wore out his father’s old boots.

“It just made me think about just everything and just how proud I am to be his son, but also everything that he taught me too, to kind of spread to the world,” he said.

Doubman is sharing his walk on social media on both his Instagram and TikTok accounts. He said he’s been overwhelmed by the response.

His followers meet up with him when he makes stops along the way, sometimes offering a place to stay or buying him a local beer.

“The best part is well, I would have to say just meeting the people...just realizing there is still good in the world,” he said.

Jessica Olson, a mother from Columbia, made a stop by Cooper’s Landing to cheer on Doubman.

“I think we all need something to remind us that there's still good things happening,” Olson said. "It's courageous and also really strong of him to take on such a daunting task, I mean, that's not an easy walk."

And, Olson’s right. So far, Doubman has walked through storms, had an eye infection and lost 30 pounds.

“The weather is not cooperating very much,” he said about his time in Missouri. “It's either storming or super hot.”

Despite the challenges, he keeps on walking mile after mile toward his goal.

"I might not have shown it while [my dad] was alive, but everything that he taught me and showed me I understand now as I'm walking across the country.”

Doubman has a goal to raise $50,000 for the Cancer Research Institute. As of the time this story aired in August, he had raised over $21,000.

You can follow his journey on his TikTok or Instagram accounts. You can learn more about his fundraiser for cancer research, here.