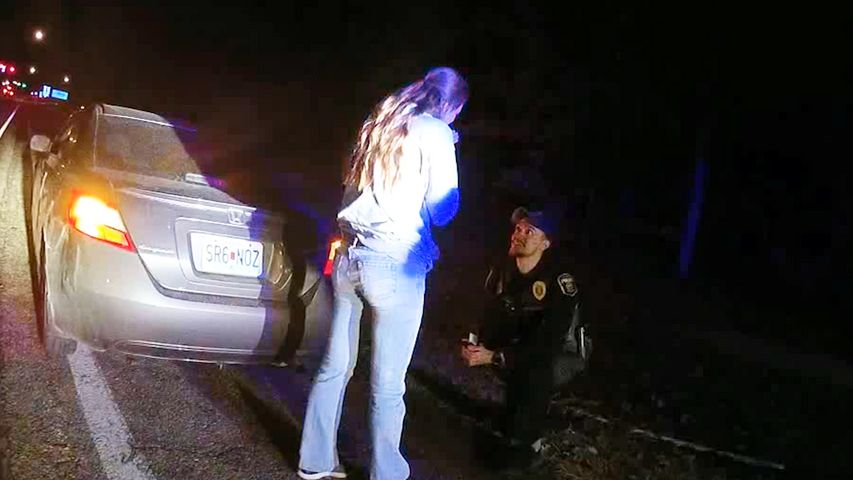 COLUMBIA - When Rebecca McDonald saw flashing lights in her rearview mirror while driving home along Stadium Boulevard one night, she wasn't sure what to think.

"Honestly, I didn't know if it was one of my coworkers or if it was CPD or who it was," McDonald said. "I had no idea what was going on."

Normally, McDonald is used to making the traffic stops. She's an officer with the University of Missouri Police Department. So, she knew something didn't seem right especially when the officers told her one of her taillights was broken.

"So, I knew for a fact my taillight was not busted out, which was another red flag," McDonald said. "And he had a look on his face and so, I knew something was up."

But, the flashing lights during the stop weren't the only things shining.

"After I bought the ring, I held onto it for a couple of weeks," Tanner Stone said who came up with the idea to pull over McDonald. "I passed around the idea to family and friends and everybody thought it would be a great idea and be really unique to do what I did."

"She was a dispatcher for me at the Columbia Police Department," Stone said.

Stone is an officer, too. He works for CPD and you could say McDonald stopped him first, right in his tracks.

"Within the first couple of weeks of being together I knew that she was probably going to be the one that I was going to marry," Stone said. "We connected on those levels and felt comfortable and safe together."

The two dated for close to a year before the special traffic stop in late November 2019.

Stone got his co-workers in on it and waited for McDonald to drive home from work one night.

"All three of us rode in my sergeant's car," Stone said. "I was on the passenger side kneeling down where she couldn't see me. When my partner said, 'I think you really want to get out of your car,' she knew something was up."

"It didn't really hit me until I saw him behind my car," McDonald said.

That's where she found Stone waiting on one knee.

In the dash camera and body camera footage of the proposal, you can hear Stone ask McDonald to marry him.

"Rebecca, your first name and my last name sounds so much better together. Will you marry me?"

McDonald, surprised by the question, asked Stone if he was serious. He responded saying, "I'm 100 percent serious!"

"I pretty much blacked out," she said. "He pulled out a ring, I guess, and asked me to marry him. I didn't believe him."

"I thought it would be super special and unique to our relationship because we did meet in law enforcement," Stone said.

Thanks to a special traffic stop, two officers who have sworn to protect and serve made the decision to now vow to love and cherish each other.

"He did a good job," McDonald said. "It was pretty special the way he decided to do it."

The pair said the big day is set for this July. They recently bought a home together and are looking forward to starting a family one day.

They said their relationship is special because they both understand what it's like working in law enforcement.

"It's one of those things where you can talk about it if you want, but if you don't want to talk about it then you don't have to...because we both get it," McDonald said.

Stone has worked for CPD since July 2018 and McDonald started with MUPD in May 2019.