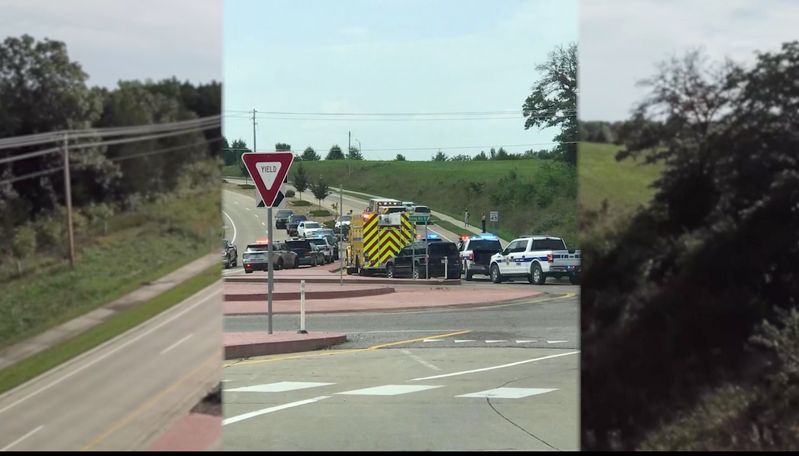 A look at the emergency response on Aug. 11 when Bob Cole drove off the road after going into cardiac arrest. Photo Courtesy: MU Health Care

COLUMBIA - Bob Cole said he felt perfectly fine when he was driving back to his Columbia home in August after running some errands.

"I’ve got the easy part here because I really don’t remember anything," Cole said.

What he doesn't remember is going into cardiac arrest and driving his car into the median near the Highway WW and Rolling Hills roundabout on the city's southeast side.

"I don't remember being in pain," Cole said.

He also doesn't recall the two people who just happened to be driving by.

“It just didn’t seem right to me at all because from the look of his vehicle," Riki Shipley said who drove past Cole's accident that August afternoon. "It wasn’t like he had a bad wreck or anything. So, I was worried there was something else wrong.”

“I almost always take the road that’s further up when I’m going to Columbia and for whatever reason I think I was just a little bit distracted...so, I came on down this way," she said.

"For some reason I went that way," he said. "I made an extra errand that I don’t usually make…I feel like God had me there for a reason.”

Maybe that reason was because Oestrreich and Shipley knew exactly what to do. Shipley is an MU Health Care nurse who works in the medical intensive care unit. Oestrreich is an officer with the University of Missouri Police Department.

"I could see that the driver was slumped over," Officer Oestrreich said. "So, I grabbed a rock off the ground broke out the rear window, climbed in and unlocked the car.”

"We got him out on the street and then just immediately started CPR," Shipley said.

The pair took turns doing CPR until the ambulance arrived.

"I didn’t expect him to make it," Shipley said. "And, then when I heard he was alive I was very shocked by that I mean I was so happy, but very shocked.”

“It sounds like it should be in an action movie or something, the way it happened," Officer Oestrreich said. "I was just happy that I was there at that time and able to help in some way.”

Some might call it good luck or happenstance that those off-duty heroes drove by when they did, but for those who were there, it was more than that.

"I don’t know how anybody could not believe in a higher being," Marsha said. "It just, it wasn’t coincidence."

"It definitely felt a little bit more than a coincidence that I came this way that day," Shipley said.

Shipley and Officer Oestrreich both stressed the importance of CPR training. They said you never know when you might need to use it.

Bob and Marsha also thanked all of the first responders and MU Health Care doctors who helped get Bob safely home from the hospital just five days after the accident. He celebrated his 73rd birthday shortly after discharge.

The Coles found Shipley and Officer Oestrreich through social media and mutual connections. They hope to remain in touch in the future.