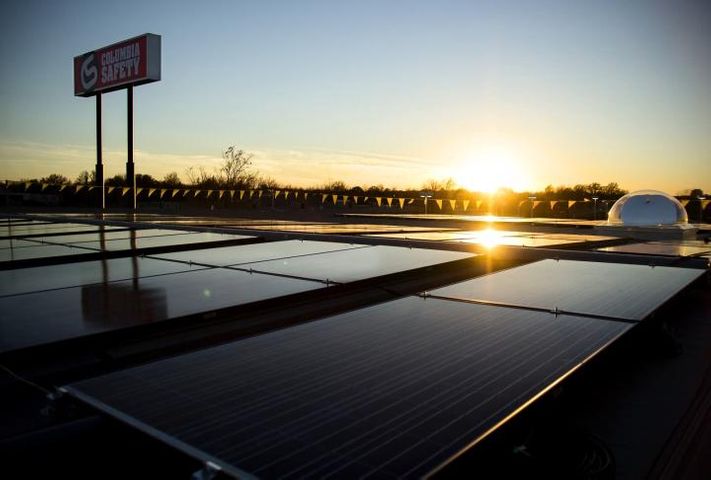 COLUMBIA - A Columbia company is making green changes that could improve the city's overall energy efficiency. It could mean savings for Columbia and its cost of electricity.

EnergyLink provides energy solutions and installations for commercial and residential businesses. After installing solar panels at Columbia Safety, an industrial and commercial supply company, EnergyLink transformed the business into Columbia's largest net zero electric consumption building. A net zero building means the structure is producing as much energy as it consumes, making the building a "Green Business."

CEO of EnergyLink Chris Ihler said the upgrade began in July 2013 and took a few months. Columbia Safety President Beau Aero said the project is something that he has cared about for some time now.

"It made sound business sense for us to look at one, making our building as efficient as possible, and two, looking at ways that we could reduce our expenses using federal and local incentives," Aero said.

The 140 solar panels are divided into three regions on the roof- the east, central, and west. The energy comes off of the roof and transfers into three inverters, known as a meter base, which is labeled to match the regions on the roof. The meter base keeps track of how much solar energy is going into the building or going back out to the city's grid. Aero said the meter tracks in real time the kilowatt [energy output] reductions that are happening at that given second.

Ihler said the grid refers to the power lines that are seen above and below the ground throughout the city.

According to a report provided by EnergyLink the effectiveness of the solar panel system has saved the equivalence of 173 acres of forest, 44 passenger cars removed from the side of the road, or 11 entire homes off of the city's power grid.

"It's two-folded," Aero said. "It's about making a sound business decision, and being as environmentally friendly as possible."

"The energy bills have been slashed," Aero said. "When you see the bills come the mail, it really starts to make sense that this is real."

According to an EnergyLink report, Columbia Safety will be saving $20, 529 per year. Aero said his electric bill is now zero.

"We're quite proud of it," Aero said. "It's been a very good decision for us, and we couldn't encourage enough people to continue with the development of that kind of system, and put as many of those in as possible."

Aero said the interesting thing is that it's not just for one year, it's every year that the solar radiation will be converted into electricity.

"Every day I pray for sun," Aero said. "Given the fact that it's beautiful, but it's [also] because it's paying us back every time the sun is out."

Ihler said the company would be able to pay off the upgrades in four to five years.