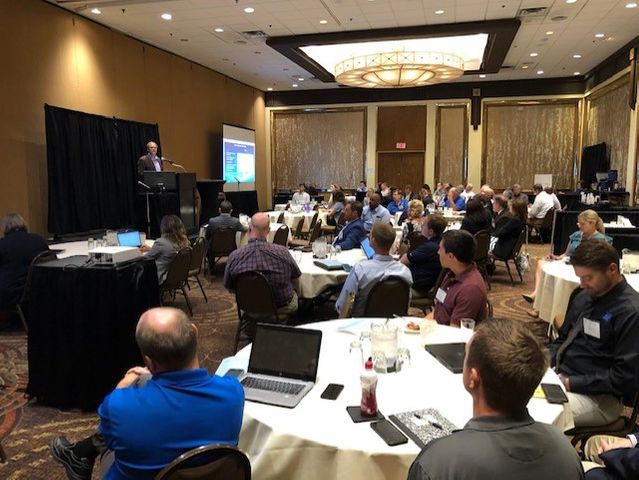 Community leaders meet at the Energy and Environment Conference at the Holiday Inn Executive Center in Columbia. COLUMBIA - An increased focus on climate change from legislature and activists has prompted utilities providers to implement renewable energies options. However, there are significant obstacles to be considered.

A major issue is the fact that Missouri consumers do not see the environment as a primary concern. Mark Birk, the Senior Vice President of customer operations for Ameren Missouri, said that customers have other priorities.

"The reality is that the environment is typically not high on our customers priorities. It may be in the top 10, but the top 1 and 2 are almost always affordability and ease of use," Birk said.

Both of these issues could be solved as the technology continues to develop. Solar energy is especially promising in Missouri.

"Missouri is not a state like Kansas or other states that have more natural wind resources...solar will continue to develop in Missouri, because solar is pretty good throughout the state," Birk said.

Missouri is the fourth most optimal state for solar generation deployment according to the Missouri Department of Economic Development.

Although wind energy is currently cheaper, Birk said that the terrain does not benefit wind collection.

Utilities providers have a number of reasons to drive renewable energy. Not only is a portion of the public yearning for more energy options, but these solutions are becoming cheaper than fossil fuels.

The Renewable Power Generation Costs report released by the Abu Dhabi-based International Renewable Energy Agency found that solar and onshore wind sources are generally comparable to the use of fossil fuels. Although there is more variability with the cost of renewable energy, these costs will continue to plummet as the technology develop.

Ameren also is motivated by their plan to dramatically reduce carbon dioxide emissions. This initiative is highlighted by the goal of 80% renewable energy by 2050.