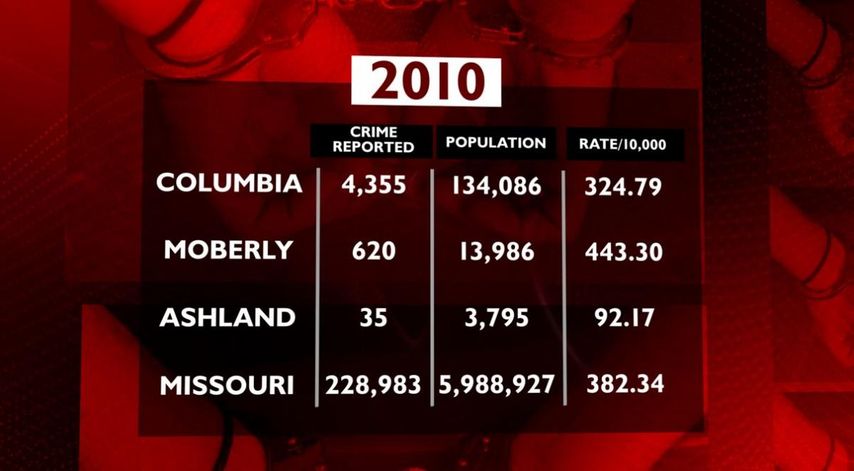 MOBERLY - According to the Uniform Crime Reports from the Missouri State Highway Patrol Statistical Analysis Center, 420 crimes have been reported in Moberly this year. In 2012, there were a total of 616 violent and property crimes.

Between the years 2000 and 2010 Moberly's population stayed relatively the same, but crime fluctuated throughout the years, hitting a spike between 2005 and 2007.

This graph shows the crime rate per 10,000 people for the years 2000 and 2010. Moberly has a higher crime rate in both years than Columbia and Ashland.

"Certainly were concerned about any crime that happens in our community at any given time, so we look at it as a personal and we try to treat it as such and treat it as much as we can," Moberly Chief of Police Russel Tarr said.

Tarr said it's difficult to pinpoint different trends in any community.

Dale Sosniecki, a Moberly resident and owner of the Coach Light store, said he feels safe working downtown and his co-workers do, too.

"I have to walk basically everywhere I go, and every evening I'll leave the store and walk 5 and a half blocks various directions to the post office and ultimately to go home and do I feel safe, absolutely do indeed," Sosniecki said.

"What mostly occurs is that it varies over the years and there doesn't seem to be a particular pattern in Ashland," Woolford said.