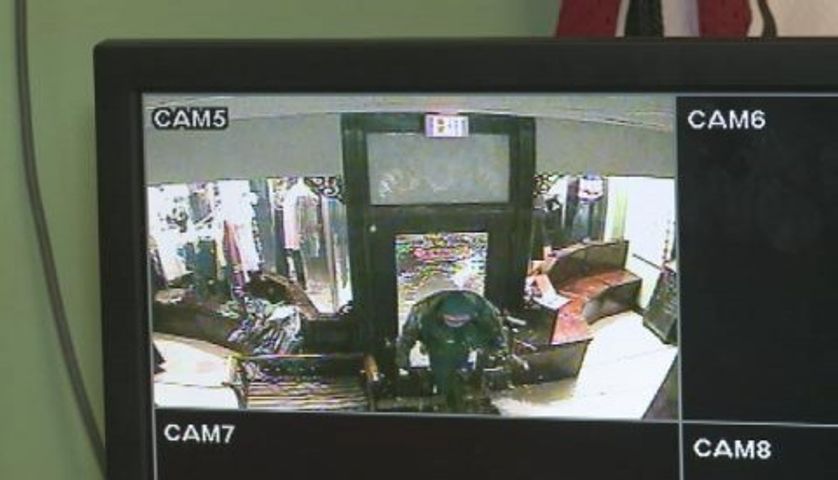 MOBERLY - Tiger Apparel in downtown Moberly has only been open since the beginning of the month, but store owner Gary Hollins has already had his worst fears come true. "I haven't gotten calls from the police just saying what is going on or who did what," said Hollins.

The store was broken into and robbed on January 10, and with few results so far Hollins is still seeking justice.

The two suspects were first caught on surveillance video at 3:01 a.m. as they attempted to pry open the door with a crowbar but were unsuccessful. The suspects are then seen on other business's surveillance video walking up and down Reed Street waiting to try again.

The suspects came back to the front door of Tiger Apparel at 3:31 a.m. and threw a brick through the window pane. This time they were successful and got away with 18 pairs of jeans. They were only in the store for seven seconds.

"We continued to look at the [surveillance] video and there was a whole hour and a half went past before the police got here," said Hollins.

Hollins realizes the merchandise is gone and knows thefts come with the territory of owning a business, but his ultimate frustration comes from the lack of awareness from the police and the community.

"I will let the community know it's us who have to report these things that we see. Cause in another video footage it shows two cars driving past. Right when they were outside breaking in," said Hollins. "The police department doesn't get the support from the government and get the right stuff that they need for cases like this because today they're breaking in stores, the next day they can kill somebody and rob them at gun point."

Moberly Police Chief Russell Tarr understands Hollins anger and wants the community to know his force tries to monitor the town of about 14,000 people, day and night.

"We do have a lot of extra watch request for business and residential areas. We try to be very proactive in our patrol duties. The off side to that or the other side to that is if the officers are actually on calls or handling disturbances in progress that takes away from the patrolling duties," said Tarr.

Without help from the police, Hollins decided to take matters into his own hands to get tips on his story. He posted on his Facebook and the Facebook page for his store about the break-in and received a tip.

"A woman a couple of days later said that same person was at a gas station trying to sell women's pants. She called the police officers and let them know that and still no arrests have been made," said Hollins.

When Tarr was asked about leads on the case he said, "We do have some leads that we are following up. Certainly when we have people who are wearing protective clothing that makes the investigation much more challenging...When we utilize evidence such as DNA there is a huge back log and that takes a while to get the lab tech to test the material."

For now that answer only has Hollins somewhat satisfied. He hopes more people might have information and help police with the inevestigation.

If you know anything that could aid police, call the Moberly Police anonymous tip line at 660-269-TIPS (8477).