Halloween Spirit Lives On In Columbia 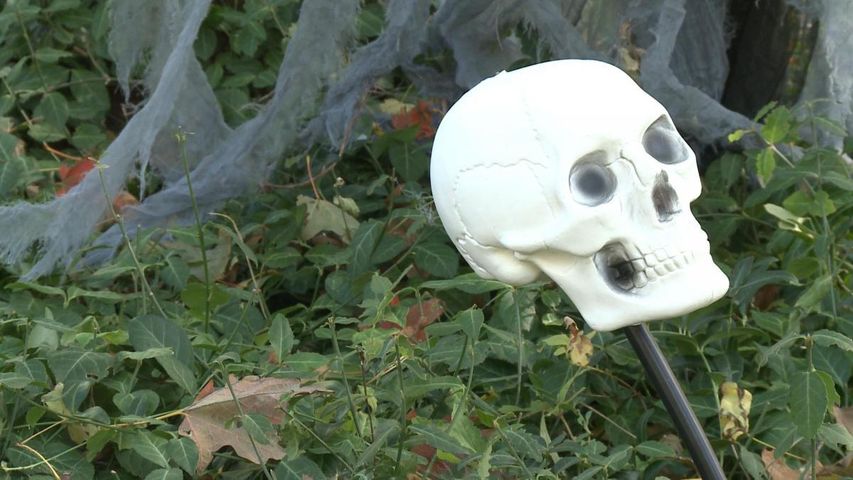 COLUMBIA - Halloween sales are predicted to drop by a bilion dollars nationwide this year, but some Columbia resident say Halloween spirits are still high.

Frank Bowman has been decorating his house for Halloween for nearly 20 years. The drive down his street is shaded and dimly lit beneath the large trees and autumn leaves. But, his red brick house stands out with a homemade graveyard in front. Depictions of dead and lost souls loom throughout his yard.

Tombstones for "John Doe," "Melvin Sprague," and "Rachel Crow" line the walkway to the front door. Crow's "spirit" hangs wearily from the tree above her gravestone. Fake bats and other ghouls loom overhead.

Bowman is bucking the national trend away from decorating for Halloween. A survey by the National Retail Federation (NRF) predicts only 47.5 percent of people in the U.S. wil decorate this year, the lowest number since 2005.

John Baxter said he has been festooning his yard for more than 30 years. His house sits on the side of the busy street off West Broadway. As people drive past, they can see cut-out witches, cats and pumpkins, but those are just a portion of the decorations Baxter owns.

"We're running a little behind this year," Baxter said. "With all the football games it's slowed us down."

Baxter has a separate shed behind his house with an attic full of decorations. Hidden away, up in the wooden attic, are the rest of his Halloween decorations. Scarecrows are tucked in the corner next to the sleds for Christmas, while large, black garbage bags cover ghosts and pumpkin designed to light up.

Both Baxter and Bowman have a hefty amount of decorations stored up to last them awhile.

"We haven't bought any in the past couple years just because we have so much of it," Bowman said.

He is very resourceful when using decortions, he said.

Bowman looked up at the ghost of Rachel Crow as he said, "This young lady over here, she is certainly store-bought, but the gravestones, all that stuff we made."

Some of those gravestones were made from the cardboard of an old plant box and have lasted him 15 years. Bowman made the switch to a more durable fiber board four years ago.

Some people are also getting more resourceful when it comes to costumes. The NRF predicts a little more than 18 percent of people will make their own costumes this year. But overall, fewer people, 43.2 percent, are dressing up, down from 45 percent last year.

Sabrina Braden-Garcia is the owner Maude Vintage in downtown Columbia. There she offers both rentals and costumes for purchase. The spirit is certainly still alive within the store. Each employee was dressed in costume, and Braden-Garcia flew through the store decked out as Amelia Earhart. She had the wig, the hat, the goggles and more. Her mood was high and so were her employees, even though her Halloween sales have dropped.

"We did notice last year we were a little less busy during the October period," she said.

Halloween is usually Maude Vintage's peak season, but she said trends seem to be changing. Still, Braden-Garcia said she sees plenty of interest in the holiday.

"I do notice that businesses put bats or cobwebs in the windows, as usual," she said. "Every year downtown gets festive."

Baxter believes the economy does impact people's decision to decorate, but he thinks Columbia has been pretty lucky.