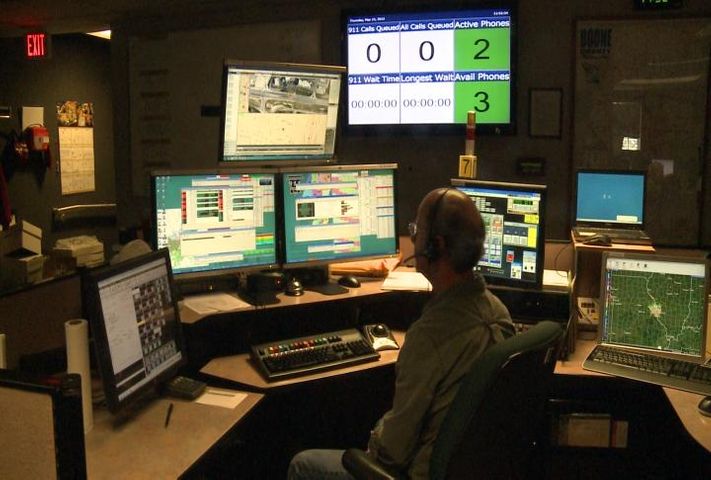 COLUMBIA -  Workers at the city-county joint communications center continue to wait for improvements to a facility that has not been updated since 1999. Voters approved a three-eighths cent sales tax increase in April to pay for improvements to the facility.   But that tax does not begin until October 1.

The current center has eight stations for monitoring radio frequencies and taking 911 calls and the employees who work those stations have worked about 2,300 hours of overtime since October 1.

"The workload actually burns people out a lot faster than a normal profession would," Maydwell said. "Some people here are monitoring three radio frequencies as well as taking calls all at the same time."

Maydwell said the men and women who take 911 calls learn to be great at multi-tasking because they have to, but additional staff would allow people to focus on one task at a time. One person would monitor radio frequencies while another took phone calls.

These are some of the reasons Boone County voters approved the new three-eighth cent sales tax to help fund 911 dispatch and emergency management services. The tax begins on October 1, but the money won't be available until December.

Maydwell said that although the center will not have a say in how this new tax money is spent, County Auditor June Pitchford is working with the center to meet its needs. First on Maydwell's list is hiring more employees.

"It didn't take too long, maybe 10 seconds until someone answered, but the woman on the phone seemed annoyed with me," Bacott said. "I guess she had already had three other calls about the noise and already sent out officers to check on the noise."

Bacott said he understands the woman was probably just tired of answering the same call, but her response didn't make him want to call 911 again.

"Working overtime is exhausting. I think more staff would defiantly help the call-takers to be a little bit nicer on the phone, and probably help them do their jobs better," Bacott said.

Maydwell said the tax money will help the center in other ways as well, such as updating the center's radios and eventually building an entirely new building with double the amount of stations to answer calls and monitor radio frequencies. But he said the first thing the center needs from the tax money is simple--more people.