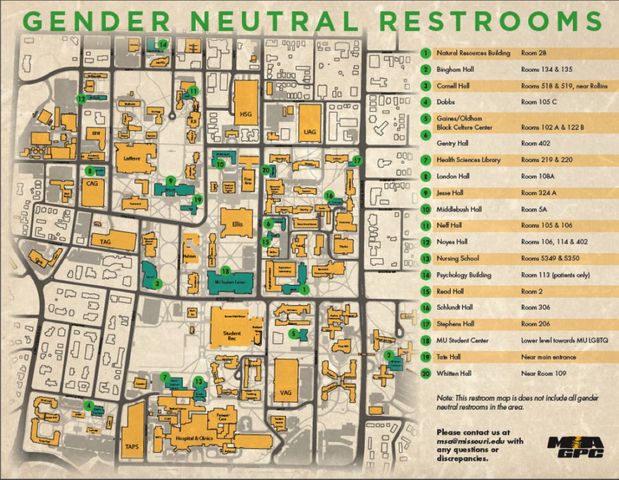 COLUMBIA - MU's Missouri Student Association, or MSA, released a Gender Neutral Bathroom's map in early September, in an effort to make all students, regardless of their gender identity, feel safe.

The effort was spearheaded by MSA President Payton Head, who said he got the idea from a friend who identifies as transgender, and is also an MU student.

"The idea of a map was created with the intention of letting students know a place where they can feel safe is," Head said. "We all pay money, you know, we all are walking around this campus, we all are contributing to the state in some way or another, and we have the right to feel safe and included on this campus."

"I feel pretty uncomfortable and unsafe in a lot of the men's bathrooms," said Cole Young, an MU sophomore who only uses gender neutral bathrooms.

He said, if he can't find one, then he would prefer to wait.

He said the importance of having gender neutral bathrooms isn't to necessarily change the physical bathrooms, but the language in order to make it more acceptable of all gender identities.

Young, who often does panels to educate the community on transgender issues and discussions, explained that there is a "trans-umbrella." It includes "binary trans" people who identify as either a transgender man or a transgender woman. And then there are people who don't feel that they belong to a gender. They either feel somewhere in between male and female, or completely outside of both. Those individuals are referred to as "non-binary."

Both Head and Young haven't found that there's been local backlash against the new map; however, Missouri legislator Jeff Pogue, R-Salem, created two bills in March of 2015 that went completely against this effort, and many like it around the state.

While House Bill 1339 stated, "No state revenues shall be appropriated to or extended upon any entity that adopts or implements any project, program, or policy that creates or attempts to create a gender-neutral environment in a previously gender-divided environment..."

Neither bill passed, but Head is open to discuss any bills similar to them.

"If the state is not behind it, then you need to get on board. Because in the next 20 years, 25 years, the students who are sitting right here... will be the ones behind the desks, making these decisions," Head said.

"I myself believe we're living in a time where we're sacrificing our morals and traditions just to be politically correct," said Skyler Roundtree, the president of the Mizzou Republicans. "A little bit of what his legislation was trying to do was to prevent something more extreme from happening in the future."

However, Young said that regardless of who's against it, everyone deserves to feel safe about something as simple as using the bathroom.

KOMU 8 News reached out to Pogue to get his perspective on the maps, and he didn't wish to comment. He said he isn't sure if he'll pursue the same bills, or any similar to it, next session.