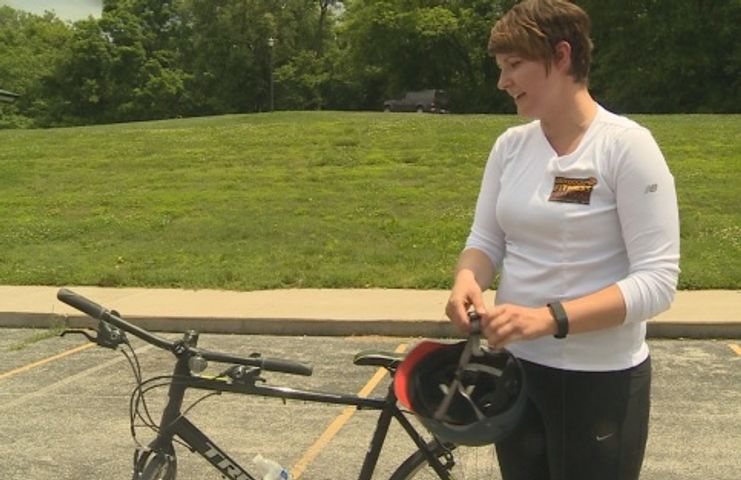 COLUMBIA - When Anna Valiavska signed up to do a triathlon at 29 years-old, she realized she was finally going to have to learn how to ride a bike.

"I was very nervous about that," she said. "As an adult learner who was tall, I thought I would fall down, and it would be very intimidating."

After purchasing a bike, an acquaintance suggested she sign up for GetAbout Columbia's Bike Buddy program. The Columbia Parks and Recreation program pairs cyclists with a licensed instructor who gives participants a quick course in bike riding.

"Bike Buddy is really about getting cyclists to the next level of cycling, whether that's never having ever cycled and starting out as a recreational cyclist or moving on to commuting," Godon said.

The program paired Valiavska with instructor Joe Silsby, who spent three one-hour sessions teaching her how to ride.

Valiavska said at first they practiced without pedals on the bike so she could get acquainted to shifts in balance.

"Eventually I graduated to pedals which was so exciting," she said.

Before meeting with Silsby for her second lesson, Valiavska said she experienced a moment of self-doubt.

"I went on one of the paved trails, and so there was this five-year-old kid just whizzing by me, and I couldn't really balance," she said. "I just thought, 'Oh my goodness! I'm just not capable. I can't do it.'"

Valiavska decided to stick with the program.

"She is a very goal-oriented person," said Silsby. "She sets these goals and works like the devil to make that goal, which is really admirable."

Silsby said a smile would often appear on Valiavska's face during practices.

Valiavska said she plans to enroll in the GetAbout Columbia city cycling class so she can commute to work by bike in the fall.

"There's a hill on my way to work, and so that's going to be a little bit of a challenge," she said.