Rapid increase in the use of electronics means more e-waste 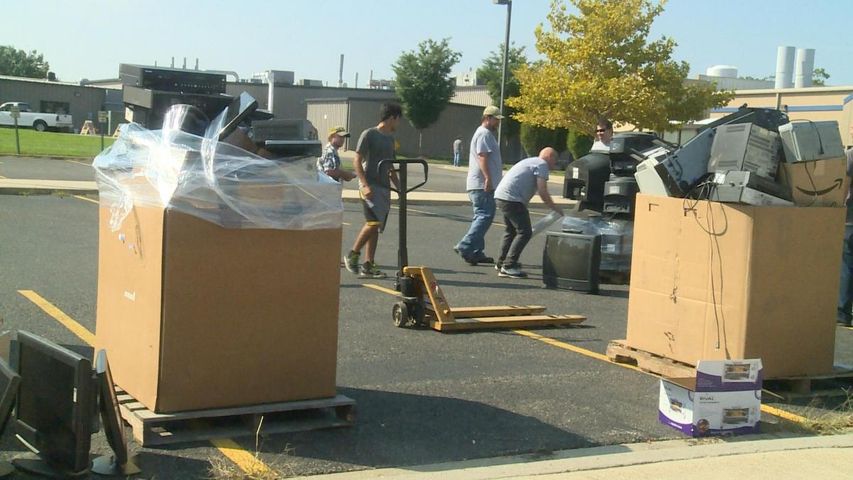 ROLLA - New data shows consumers on track to buy more electronic devices than ever before and, if the current trend continues, most of those devices will end up in your local landfill.

While many states are passing laws to prevent e-waste from going into landfills and incinerators, it's still legal in Missouri and most other states to trash electronic devices. Just 16 states have banned the disposal of electronic devices in household trash.

According to the Consumer Electronics Association, most U.S. households contain about 24 electronic products.  A study by The NPD Group shows consumers are expected to spend more per person on new consumer electronics devices this year. As technology advances, electronics are projected to gross more than $210 million in the U.S., a 9 percent increase, by 2018.

With the rise in the use of electronics, the demand for e-recycling increases as well. Electronic waste, e-waste and e-scrap are all terms used to describe unwanted electronic products.

Data released by the EPA in February of 2014 indicates e-waste is the most rapidly growing segment of the municipal solid waste stream. In 2012, the U.S. generated more than 3 million tons of e-waste, most of which ended up in landfills and incinerators. Out of the more than 3 million tons of e-waste generated in the U.S. in 2012, 70 percent went into landfills and incinerators and 29.2 percent was recovered for recycling.

Although it is legal to dispose of electronic devices in Missouri, the state developed a framework for reusing, recycling and disposing electronic materials in an economically sustainable and environmentally safe way. The Missouri Department of Natural Resources created a partnership with several organizations and companies across the state and developed a campaign called E-cycle Missouri which debuted in 2006.

"Most people don't know that most things, almost anything with a plug or batteries, can be recycled," said Ali Alyasiry, an employee of Midwest Recycling Center. "And if they do know, they don't know where to recycle it."

With the rapid growth of the reliance on technology, resources like ECOATM, a nationwide network of automated electronics recycling kiosks, have emerged. There are more than 10 ECOATM's in Missouri. The company announced in early September that it has collected more than three million phones, tablets and MP3 players since its founding.

Phone companies and kiosks, such as ECOATM, give instant cash or monetary incentives for turning in electronic devices, but environmental agencies are advocating for legal action towards the disposal of electronic devices.

Environmental organizations like the Electronics Take Back Coalition and Vintage Tech are investigating the credibility and certification of some e-recyclers due to the increase in the amounts of e-waste that is exported, possibly to locations where it will not be safely disposed.

Privacy is also a concern. With the disposal of computers and tablets and hard drives, which may contain personal and sensitive information, using an certified electronics recycler can ensure any data stored on a devices is completely removed.

Through Missouri's e-cycling program, people and companies are able to receive tax incentives, as well as certificates of recycling or destruction. The state regularly sponsors a series of collection events statewide to recycle or dispose electronic equipment.

51-year-old Scott Alford, a resident of Phelps County, makes e-cycling a family outing with his children. Alford said he has been recycling his electronics through the state's events every two years or so.

"You'd be surprised at all the junk that people just drop off on our property. I just assume people just don't know what to do with the stuff," Alford said.

He is willing to travel, he said, in order to make the drop off. At his most recent trip to Rolla for an e-cycle event, he was joined by his 15-year-old daughter Jalyn Alford.

"It's important to do your part" Jalyn said, after helping to unload a four foot high pile of junk from the back of her dad's pickup. Jalyn said all the stuff they dropped off is evidence that education is important.

"We recycle, but not a lot of people where we live recycle. We find stuff everywhere," she said. Refrigerators and microwaves, she said. "You name it."

"It's kinda sad that people don't care about their community or what they're doing to the environment," she said.

E-waste contains many valuable, recoverable materials such as aluminum, copper, gold, silver, plastics, and ferrous metals but could also have very toxic materials such as lead, mercury, arsenic, cadmium, and selenium.

According to the EPA, benefits from e-recycling include conserving natural resources and the energy; reducing pollution and greenhouse gas emissions; promoting sound management of toxic chemicals such as lead and mercury; creating jobs for professional recyclers and refurbishers; and making new markets for materials that are disassembled.

Rory McCarthy, a scientist from Brewer Science, which sponsors E-cycle Missouri, said he wants people to understand the importance of recycling.

"Remember when you go to the store to buy a new computer or a new TV, remember to close the loop," McCarthy said.